Book Review: Until Next Time 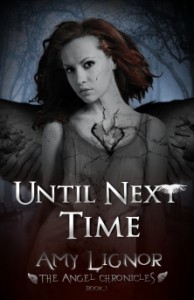 I have to say, I am kind of loving that the tides seem to be turning from vampires to angels in books!  I love a good angel novel. Until Next Time is by Amy Lignor and is the first book in The Angel Chronicles series.

Matt and Emily are an angel/warrior team.  They take over the lives of 2 people on earth – Daniel and Liz.  Daniel had committed suicide and Liz was prone to strange trances – one of which killed her.  In order to complete their mission they need to learn what it is like to be human and have emotions.  Then they must figure out how to control these emotions so that they don’t completely screw up their mission.  (Considering that most humans aren’t even entirely sure how to control their emotions this is probably easier said than done.)

They also have no idea who it is they are supposed to help and have to figure this all out on their own. They come in contact with a lot of people as well, which doesn’t really help matters for them.

The book is a relatively quick read, 36 chapters plus an epilogue and since it is a young adult novel the reading level is easy enough that you will just fly through it. (No pun intended)  I really enjoyed all the characters and the story.  It went back and forth a bit which could be confusing at times – but if you stick with it I think you will really enjoy the book!

I received a free e-copy of this book from Tribute Books in order to write this review and participate in the blog tour for Until Next Time.

How does a girl choose between the one who steals her heart and the one who owns her soul?

Matt and Emily were created for a specific job. Raised and trained as the ultimate angel/warrior team, they are sent down to save, defend, judge and forgive, depending on the ‘life’ they’ve been assigned. What they don’t realize is that the power of human emotions, such as love, anger, passion and fear can take over even the best of souls, causing them to make mistakes and follow paths that lead to confusion and heartache.

When the reason for their training is finally revealed, the angel/warrior team find themselves thrust into a world they know nothing about. Matt takes over the life of Daniel, a young man with a great deal of baggage. Emily becomes Liz, a girl living in a remote village who relies on nothing more than her own strength to survive. A violent storm erupts one night, and framed in the window of Liz’s establishment is a frightening face. Let in by the soul of a Good Samaritan, the two visitors bring with them a past full of secrets that could literally change an angel’s path and a warrior’s plans.

From murder to redemption, this angel/warrior team must find a way to keep the faith they have in each other in a world that’s ripping them apart.

Until Next Time GoodReads page:
http://www.goodreads.com/book/show/13319888-until-next-time