March 7, 2012 by ConcertKatie No Comments 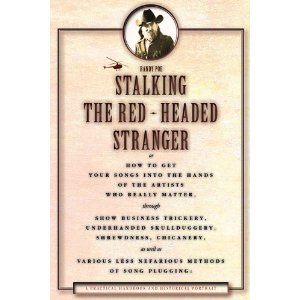 I just have to start out by saying that I LOVED this book.  It was hard to put down once I started it, the story was so well written.

Stalking the Red Headed Stranger is subtitled “Or, How to Get Your Songs into the Hands of the Artists Who Really Matter Through Show Business Trickery, Underhanded Skullduggery, Shrewdness, and Chicanery as Well as Various Less Nefarious Methods of Song Plugging: A Practical Handbook and Historical Portrait”  Quite a subtitled there, right?

The book is written by Randy Poe.  The story starts with him talking about how Lieber (of Lieber and Stoller) asked him to pitch a Frank Sinatra song to Willie Nelson, assuming that Randy knew Willie.  (Randy has several photos with Willie and an autograph hanging in his office.)

Randy then goes back to talk about how he actually ended up in his career and how he knew he wanted to be in the music industry and he started at the bottom, temping for a music company and ended up the president of Lieber and Stoller.

Then it talks about how he “stalked the red headed stranger” and ended up flying from Los Angeles to Canada to try and pitch the Frank Sinatra song to Willie.  Along the way, he gives tips and advice to anyone who is interested in working in the music business.

In addition to the story – I really liked the pages of the book.  It was almost like a scrapbook with a bunch of photos to go along with his stories added in and album covers and the like.  I definitely recommend this book to anyone interested in working in the music industry or looking for an inside look at the industry!

I received a free e-copy of this book from Net Galley. I was not otherwise compensated. All opinions are my own.

Stalking the Red Headed Stranger is a guide to the art and history of professional song plugging. But this isn’t your run-of-the-mill history book/instruction manual. It is an in-depth, up-close look into the real music business by industry insider and Grammy Award nominee Randy Poe, who has represented literally hundreds of the greatest songs in the history of popular music, including “Stand By Me,” “Happy Together,” “Jailhouse Rock,” “Under the Boardwalk,” “Hound Dog,” “What a Wonderful World,” “Spanish Harlem,” “Chapel of Love,” “Summer in the City,” “Love Potion No. 9,” and “Kansas City.”

But wait! There’s so much more! Interwoven throughout this entertaining and enlightening book is the hysterical saga of the author as he chases American icon Willie Nelson across Canada-via plane, taxi, rental car, and even ferryboat-in an attempt to pitch a single song to the Red Headed Stranger. And what happens on Willie’s bus doesn’t stay on Willie’s bus.

Stalking the Red Headed Stranger, or How to Get Your Songs into the Hands of the Artists Who Really Matter Through Show Business Trickery, Underhanded Skullduggery, Shrewdness, and Chicanery, as Well as Various Less Nefarious Methods of Song Plugging: A Practical Handbook and Historical Portrait is the funniest, hippest, longest-titled how-to book you’ll read this year.

RANDY POE (Los Angeles, CA) is a recipient of the music industry’s Heroes & Legends Pioneer Award; is a Grammy-nominated record producer; and has produced, compiled, and/or written the liner notes for more than 100 albums. He is the former president of the California Copyright Conference and is on the advisory board of renowned folk music publication Sing Out! He is a recipient of the ASCAP/Deems Taylor Award for his book Music Publishing: A Songwriter’s Guide. Poe’s other books are Squeeze My Lemon: A Collection of Classic Blues Lyrics, featuring a foreword by blues legend B.B. King, and Skydog: The Duane Allman Story. Since 1985, Randy Poe has been the president of Leiber and Stoller Music Publishing in Los Angeles. Prior to his position with Leiber and Stoller, Poe was executive director of the Songwriters Hall of Fame in New York.