Book Review: Way Down: Playing Bass with Elvis, Dylan, the Doors, and More 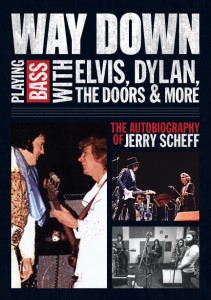 Way Down is an autobiography by bassist Jerry Scheff. It takes a different approach than most autobiographies and doesn’t go in order. He jumps right in to the action of being on tour with Elvis. It bounces around a bit chronologically as well, but that didn’t make it difficult to follow. Jerry went on tours with Elvis Presley, Elvis Costello, Bob Dylan and John Denver! He talks about the ups and downs of the music business – his time with drugs and how and why he quit them all (with the exception of alcohol).
He gives his honest opinions on everyone he worked with – the stars and everyone they surrounded themselves with. Also interesting is in the beginning he notes that any conversations may not be exactly what was said – since things are forgotten over the years. I thought it was interesting that he note this because I know some other books I’ve read (historical) have been criticized because there is no way you could know and/or remember the dialouge that went on. I always thought it was a given, but a lot of people have been getting upset over that so I liked that he pointed this out to the reader.
I really enjoyed the book and the insight it provided to being a touring musician as well as a studio musician. It also talked about some of the “drama” of the times – segregation and how he often ended up the only white guy at jazz clubs and was always worried that something might happen. The deaths of John and Bobby Kennedy, the Vietnam war, etc. It was interesting to see how the music changed with the times and how the musicians Jerry worked with were changing their styles throughout their career.
Way Down: Playing Bass with Elvis, Dylan, the Doors and More is set to be released March 27, 2012!

About the Book
In this candid and perceptive memoir of his 45-year career, bassist Jerry Scheff takes us onto Elvis’s private jet, on tour with Bob Dylan, and into the studio with the Doors. A stalwart presence behind some of the greatest names of popular music, Scheff has also played with Roy Orbison, Elvis Costello, the Association, Neil Diamond, Johnny Mathis, the Everly Brothers, John Denver, and Nancy Sinatra, to name just a few. Eschewing hype, Scheff provides a behind-the-scenes perspective, from having worked sleeves rolled up, side by side, with the great artists in their factories.

The book opens with the TCB band’s learning of the King’s death while en route to a tour date, a pivotal moment for him, the rest of the band, and the world at large. He then proceeds on a nonlinear journey that mirrors the process of true life-reflection, from his roots in San Francisco to his touring all over the world.

This is a tale of man who has truly grown a career from a genuine love of music and of his instrument, proving how following that gift can bring a person to places beyond his wildest dreams. It is an exciting inside view of the evolution and craft and work of making rock and roll-a must-have for true music craftsmen and music junkies in general.