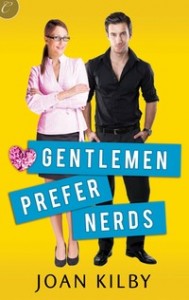 Gentlemen Prefer Nerds by Joan Kilby is an adult romance fiction novel. At first, I wasn’t sure exactly what to expect. The title drew me in, the description seemed interesting enough so I decided I’d check it out.  When I first started reading it I wasn’t entirely impressed with the story – but then the rare pink diamon – The Rose – got stolen and BAM! I was completely invested in this book and needed to finish it.

The main character is Maddie Maloney, she works in her aunt Grace’s jewelry shop where they have a rare pink diamond – The Rose.  Maddie helped discover the diamond which is why it is at their shop.  One day while Maddie is admiring the diamond a stranger somehow gets in to the shop and tells her that there is a jewel theif called The Chameleon that is going to try and steal it.  Maddie isn’t sure she believes him, but tries to be careful anyway.

Turns out, the stranger was right and The Rose does go missing right under Maddie’s nose and is replaced with a synthetic replica.  Police immediately assume that Maddie stole it and she is placed under arrest.  The stranger, Fabian, comes to her rescue and they go on a hunt for The Chameleon to try and rescue The Rose.

Fabian gets a make over for Maddie so that The Chameleon will not recognize her.  She then tries to seduce him to get The Rose back.  Meanwhile, she is falling for Fabian.  Without giving too much away, her opinion on both The Chameleon and Fabian changes several times throughout the story – but considering this is a romance novel – you must assume she ends up with one of them (or both?) eventually…

A quick read, really well written and a fun story to follow (although perhaps a bit far fetched – but those are the most fun, I think)

I received a free copy of this book from the publisher through NetGalley in order to write this review. I was not otherwise compensated.

Self-professed nerd Maddie Maloney is an expert on jewels. Jewel thieves are another matter entirely! So when a mysterious Englishman warns her that a thief known as The Chameleon is after the rare pink diamond on display in her aunt’s shop, she tells herself it’s just a joke. Even if she can’t get Mr. Tall, Dark and Handsome out of her mind…

But Fabian Montgomery doesn’t give up easily. He’s everywhere she goes, convinced the thief will strike. And when the diamond does go missing-and Maddie is suspected of stealing it-he whisks her away from the police and together they pursue The Chameleon.

Fabian plunges her into a glamorous world far from her humble workshop and transforms geeky Maddie into a sophisticated siren capable of espionage. Her mission: to seduce The Chameleon and steal back the diamond.

But Fabian isn’t telling her everything-like who he works for, and why he’s so interested in The Chameleon…