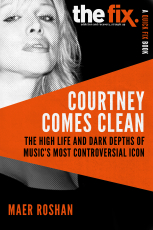 Courtney Comes Clean: The High Life and Dark Depths of Music’s Most Controversial Icon by Maer Roshan is a rather short book (my favorite kind!)  which consists mostly of an interview between Courtney and Maer. (There is also additional reporting and writing from Matt Dickinson and Walter Armstrong.)  There are 7 chapters in the 94 page book: Under the Influence, Kurt and Courtney, Bad Romance, Nobody’s Daughter, Money Changes Everything, Life the Movie, Love Additction. Courtney talks about her life and how she is cleaning up her act and dislikes when she still gets labeled as a “crack head” (especially from Kelly Osbourne).  It is interesting insight into a pop culture Icon, essentially in her own words. What started out as a profile for a magazine turned in to something much bigger and probably much more interesting than could have fit in the pages of a magazine!

Courtney Comes Clean was released January 15, 2012 by Sterling Publishing.  I received a free  review copy through NetGalley for this review. I was not otherwise compensated.

In her endless quest for fame and fortune, Courtney Love has lived through addictions to substances, behaviors, and celebrity itself. For almost a year, the rock icon talked to (and tweeted at) The Fix editor-in-chief Maer Roshan about Kurt Cobain; her daughter, Frances Bean; her allegations of fraud; and her will to survive. As addiction redefines itself in the 21st century, Love seems like its prototypical saint-and sinner.