November 3, 2013 by ConcertKatie No Comments 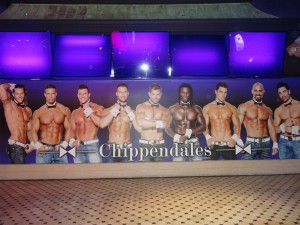 Jaymes & James from The Amazing Race was the only reason I wanted to see Chippendales. Thursday we had originally planned on seeing the show, but Jaymes had tweeted and said he would be in LA. Sad! Friday we hoped he would be back and we freaked out a little when he tweeted that he was flying back. We decided to get the 10:30 tickets so I could a) see Boyz II Men too and b) if he didn’t make it in time for the earlier show we were good.  We freaked out even more when he tweeted ME and said that he would be back in the show that night!

After Boyz II Men we headed to Harrah’s and hoped the Rio shuttle once again and made it to the Chippendales theater just as doors were opening.  No photos were allowed, of course (nudity) but the show was a lot of fun even though I didn’t really think Jaymes and James were in it all that much and there was a drunk girl standing and grinding the chair in front of her all damn night. (After the show her friends were carrying her out and she could barely stand)  Jaymes sings a lot though during the show!

After the show for $20 you can get your photo taken with all the guys and they print it up for you right on the spot! I thanked Jaymes for his tweet and he said no problem and that he was glad I made it to the show.  Then we picked up our photos, I stocked up on merch (of course) and it was time to head back and pack up all my stuff!