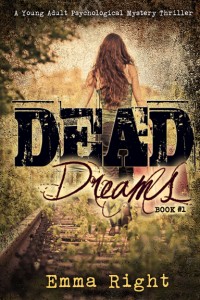 Dead Dreams first introduces us to Brie O’Mara who is 18 and living on her own and in search of a roommate.  Her parents aren’t sure this is the greatest idea, but go along with it.  Enter Sarah – who Brie thinks is the perfect roommate.  She is heir to a huge fortune and seems normal enough.  Should she have done a background check? Maybe.  Brie wants to be an actress and move to New York City but for now she is working 2 jobs.  Sarah gives her an offer that is a) too good to be true and b) that she can’t refuse.

However, as soon as Sarah enters the picture things start getting out of hand. There is a break in in their apartment, so they get an alarm system.  Sarah’s brother and Uncle are after her and her fortune which she can only get if she doesn’t get in trouble with the law – or worse yet – end up dead.

The two get Sarah’s plan underway – where there is switching of identities, lots of money switching hands and all sorts of other crazy stuff going on.  And then when they are set to put everything in to play, Brie’s Dad ends up in a coma in the hospital and she is torn between continuing through with this plan with her now “best friend”, Sarah, or staying behind for her family.  She also seems to think that her brother Keith is somehow in on this all and knows Sarah.  And then when they are ready to leave – Sarah is MIA and there is a lot of blood in Brie’s bedroom – where Sarah is sleeping.

I wish I knew more of what was going on – this is only Book 1 and I felt it ended with no closure whatsoever on the subplots and left me still confused.  Hopefully this will all be tied up and explained in future books.

Eighteen-year-old Brie O’Mara has so much going for her: a loving family in the sidelines, an heiress for a roommate, and dreams that might just come true. Big dreams–of going to acting school, finishing college and making a name for herself. She is about to be the envy of everyone she knew. What more could she hope for? Except her dreams are about to lead her down the road to nightmares. Nightmares that could turn into a deadly reality.

Emma Right is a happy wife and homeschool mother of five living in the Pacific West Coast of the USA. Besides running a busy home, and looking after their five pets, which includes two cats, two bunnies and a Long-haired dachshund, she also writes stories for her children. When she doesn’t have her nose in a book, she is telling her kids to get theirs in one.

Right worked as a copywriter for two major advertising agencies and won several awards, including the prestigious Clio Award for her ads, before she settled down to have children.