July 4, 2013 by ConcertKatie No Comments

After thinking that I wouldn’t be making it to a One Direction show, I was able to go see them Saturday at the Jones Beach Theater on Long Island.  I had never been to the venue – it is really cool! (Literally.) The stage is pretty much in the water at the beach and it’s a really neat place and hopefully I’ll get to go to another show there someday!  There were talks of thunder storms so I went prepared with my rain coat since the whole venue is open air and the night before the guys were playing in the rain.

I was a bit nervous about my ticket (stubhub / location) but it actually turned out to be really nice in the center of the venue! And there were still a lot more people behind me which is always sure sign that your tickets aren’t that bad 😉

5 Seconds of Summer opened.  I didn’t want to stand for their set, but the girls in front of me did, so I didn’t see any of it. (Well, that’s not entirely true. They recorded the whole thing on their phone so I was able to watch through the phone screen for some of it!) It was still light out so even if there was something on the screens, I couldn’t see it.  But from what I heard they were good.  They are from Australia and Louis discovered them on YouTube and asked them to join them on tour.  I think they came on at 7:30 or 7:45 – even though the show was “supposed” to start at 7. (The girl behind me was whining from 6:30 that no one was on stage yet…)

Then after what seemed like forever, One Direction took the stage! (I thought that they would be coming out at 8:20, but it was later than that. Which was worrying me because I thought there was going to be rain – but that was a non issue.)  They made sure to thank the fans constantly throughout the set which was a nice touch.  Harry also mentioned how the tickets went on sale over a year ago so that we had been waiting for the show for a long time.

For the questions from Twitter – they talked a bit about what 3 items they’d take on a deserted island with them, then Louis and Liam did cartwheels and they did the Harlem Shake which ended up with Harry having a horse head on and then saying he couldn’t sing any more because he was a little horse. (hoarse.)

During the encore, when Liam came out to sing Live Like We’re Young, the mic was not working.  So, he did what any great performer does and threw his arms out to motion to the fans to sing the verse.  And of course we did with no problem.  Then he ran back to the main stage to swap his mic out for one that was working 🙂

The show was a lot of fun and I thought it was cute how they mentioned the song titles before a lot of their songs (of course, when I didn’t need to be keeping track of a setlist!) and I am not sure that there was anyone who had more fun during the show than Harry! 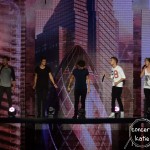 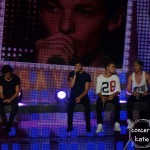 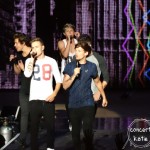 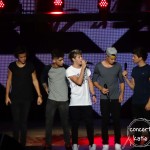 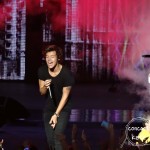 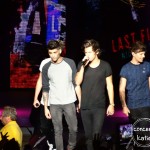 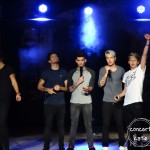 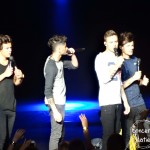 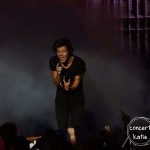 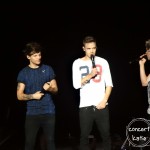 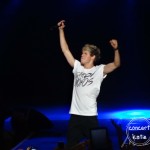 Live While We’re Young
What Makes You Beautiful