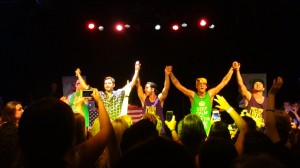 Thursday night Aaron Carter brought his “Afterparty Tour” to my favorite venue.  I wasn’t really sure what to expect  because typically at these shows everyone sits and is respectful and I think I’ve stood for like 2 songs there, ever.  I knew with Aaron that there would be standing at least for the whole show but I wasn’t prepared (and I don’t think the venue was either) for the insanity that went on once Aaron took the stage. (But more on that later)  I also noticed that these girls there to see Aaron were not very observant.  When I first arrived I saw Aaron at the front of his van. Later when I got in line the girls behind me asked “I wonder where he is right now!” and her friend said “Probably backstage!” As if on cue, Aaron jumped out of the van shirtless and no one seemed to notice.  In between openers Aaron was peaking out from the curtain from backstage and the girls next to me waved to him but everyone else seemed to be oblivious. He even stuck his whole head out the curtain at one point!

First up was Justin Levinson – I was not a fan.  His music comes across as a temper tantrum. He stomps his feet, he bangs on the keyboard… it was a bit all over the place and all the songs seemed to melt into one.  But he did play a kazoo on his last song so, bonus points for that.

Alexis Babini was the second opening act and I really enjoyed his set! His stage presence seems like he is playing in a huge arena, but I think that just added to his appeal. His set seemed to go over much better with the crowd as well. I was totally in love until he decided to throw in Katy Perry into a medley. Instant turn off! 😉

Brandon Walden was the last to take the stage – he is Aaron’s sound manager and said he was asked to do a couple songs.  He did an Ed Sheeran song as well as an original song (and one other I think as well) and tried to get everyone to do an “Aaron, Aaron” chant as he was leaving the stage.  Which worked for a little bit but set up took so long, it fizzled out fast.

Aaron came out in a tank top with himself on it – from 12 years ago (or more!).  I guess that is one way to promote the merch you are selling.  All the girls started jumping over the seats and made a GA pit in the front row and then girls were standing on chairs and falling all over the place. It was absolutely nuts.  And here I was just concerned I’d have to stand the whole set, I never expected that girls would be falling on me too! He stared with I Want Candy (our setlist was a lot different than anything I was able to find online) and went into Another Earthquake and even took a moment to call me out for not jumping.  Sorry, Aaron, I can’t jump! I shook my head no at him and he wasn’t happy but I was not about to attempt to tell him my life story, in the middle of the show. (Nor was I going to pay $70 to meet him to explain. I sent a brief tweet though)  And I’m getting kind of sick of being called out for these things.  If you tell people to do something and they don’t do it, that’s their loss, just move on. They may have a legitimate reason for not doing it…

Because there was a piano backstage, Aaron asked them to bring it on stage and decided to show off a bit since he is a trained pianist.  He did a song about why he would never drink again and then another song on the piano too but I didn’t catch what it was.  Meanwhile, he had a girl sitting up on the stage that he was going to serenade which was kind of awkward because her back was to him.  But the next song was I’m All About You and well, he certainly did serenade her.

Then he talked a bit about how he loved the 90s – CatDog and Dunkaroos… and if anyone knew where to find Dunkaroos to get him some. (Do they even make them anymore? They are damn near impossible to find!) and then he did a cover of Vertical Horizon’s Everything You Want.

He did a couple other songs – one being a new one that I’m not sure if it’s called This is the Life or not but that is the lines he had the crowd sing back.  and Not Too Young, Not To Old before taking off his shirt and putting on, of course, an ONeal jersey. Of course then it was time for How I Beat Shaq.  A bit weird for a 25 year old to be singing it, but at least he’s not embarrassed about his past and knows that if he didn’t do it we’d have all been pretty pissed.

Then it was time for the encore – which was of course – Aaron’s Party.

Overall the show was very high energy, a lot of dancing and flips (he had 2 back up dancers) and it was a lot of fun.  And then we got a HUGE thunderstorm which started approximately 1 second after I got in my car.

(I’ll see if I can maybe add a few photos later! I’m in the process of moving and still getting everything set up)

Setlist:
I Want Candy
Another Earthquake
America A O
Bounce / I Would / Iko Iko / To All The Girls
I’ll Never Drink Again
? (another song on piano)
I’m All About You
Everything You Want (Vertical Horizon)
Tuning It Out
This is the Life
Not Too Young, Not Too Old
That’s How I Beat Shaq


Aaron’s Party (Come Get It)