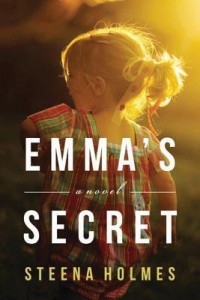 Emma’s Secret is the sequel to Finding Emma which I reviewed last year. (I also reviewed Dear Jack which is a novella that goes along with the series)  After Emma is stolen by Dottie and living with her and her husband Jack for 2 years, she is returned home in Emma’s Secret.  Her mom, Megan, is finding it hard to adjust and is incredibly overprotective.  Her middle daughter, Alexis is feeling ignored and like her mother doesn’t care about her. Hannah, the oldest daughter, feels guilty about Emma’s disappearance and tries to keep an eye on Emma at all times.  Megan and Peter are still trying to mend their relationship and Megan is still having doubts on whether or not he is cheating on her with his business partner.

Peter is keeping a few secrets from Megan – he isn’t cheating but he is taking Emma to see her “Papa” at the donut shop and has asked the police to drop the retraining order.  Emma misses her Papa and Peter realizes that this is good for her in helping her move on and not be so withdrawn at home.  But he doesn’t want to tell Megan because of how she will probably react.

Meanwhile, Megan’s BFF is dating the detective who was on Emma’s case that Megan feels close to.  She didn’t even tell her about it – Megan happened to show up at her home to find them kissing which made things worse.

I think this book brought a lot of closure to the story and the characters that I had grown to love in the earlier novel. It tied up a lot of loose ends and I think it ended in the best way possible.  If you read Finding Emma then you definitely need to read Emma’s Secret to see how everything concludes.

For two years, Megan, Peter and their two older daughters, Alexis and Hannah, dream of nothing but being reunited with the family’s youngest child, Emma, who was kidnapped just before her third birthday. When Emma is miraculously found living with an elderly couple just miles from the family’s home, they are hopeful that her return will heal the wounds her disappearance created.

But Emma is vastly different from the sunny toddler they remember. She barely remembers her parents or her older sisters. She is quiet and withdrawn, and, worst of all, longs for the very people who kidnapped her.

Megan is consumed with bitterness, while Peter works later and later nights in the company of his gorgeous business partner. And in the middle of everything, Megan’s best friend has become suddenly distant and secretive.

Then a chance encounter in town leads to a secret that changes everything again for Emma. And Peter must decide between the happiness of his youngest daughter and the trust of his family.

STEENA HOLMES grew up in a small town in Canada and holds a bachelor’s degree in Theology. She is the author of two previous novels, Chocolate Reality and Finding Emma. In 2012, she received the Indie Excellence Award. Holmes enjoys writing stories other mothers of young children can relate to. She currently lives in Calgary with her husband and three daughters and loves to wake up to the Rocky Mountains each morning.