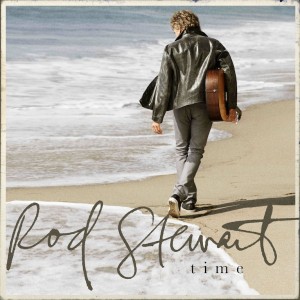 Time is Rod Stewart’s first album of new material in almost TWENTY years!  The landmark new album, titled “Time” marks Stewart’s long-awaited return to his songwriting roots and features 12 tracks, 11 of which he wrote and produced.  Time was released on May 7th by Capitol Records.

During an early preview of seven tracks, Billboard proclaimed, “Stewart rocks again.” “Lushly produced with an abundance of tempo and an overall guitar-based core sound, his inimitable warm vocals sound as strong as ever.”

The first single off the album is “She Makes Me Happy”.  The second single, “Finest Woman” has also already been released due to overwhelming anticipation of this new album!

Time is a landmark release in Stewart’s career, born from a burst of inspiration from which he rediscovered his voice as a songwriter and rekindled his gift for writing the honest, nerve-touching narratives that have been the cornerstone to the first three decades of his career. Since 1991, Stewart, the lyricist and melodist behind such staples as “Tonight’s the Night”, “You Wear it Well”, “You’re In My Heart”, “The Killing of Georgie” and the indelible “Maggie May,” had simply lost his songwriting muse. But, beginning in 2011, during the period he began working on what would become his internationally best-selling autobiography, Rod, it returned.

Said Stewart, “Something about that process of reviewing my life for the book reconnected me and that was it: I was away. Suddenly ideas for lyrics were piling up in my head. Next thing I knew, I had a song called ‘It’s Over’ about divorce and separation. And now I was getting up in the middle of the night and scrambling for a pen to  write things down, which has never happened to me. I finished seven or eight songs very quickly and I still wasn’t done and it became apparent that I would eventually have a while album of material to record, which had never happened before.”

Rod Stewart is a two-time inductee into the Rock and Roll Hall of Fame, a Grammy Living Legend, and in 1007 he was bestowed the prestigious CBE (Commander of the British Empire). He has released 27 studio albums and garnered an estimated 150 million in album sales worldwide. Later this year, Stewart is scheduled to kick off his “Live the Life” tour in Europe beginning June 1, followed by his return this July to his residency, “Rod Stewart: The Hits” at Caesars Palace in Las Vegas, before resuming the North American leg of his “Live the Life” tour with Steve Winwood beginning October 17. 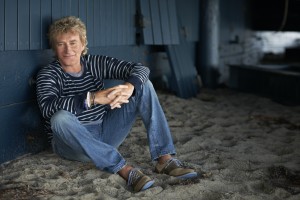 Rod Stewart is not someone’s who’s CD I would probably just pick up if I saw it.  I know a few of his bigger singles, but he hasn’t had a CD released for most of my life! (Yet still has had 27 albums out which is just ridiculously awesome and crazy.)  However, I am enjoying Time a lot more than I thought I would be!  The first song on the record – She Makes Me Happy – is so upbeat and happy and fun and I love it, it is great to have the windows down blasting on a nice warm day 🙂  The CD is a great mix of tunes and ends with Pure Love which is such a beautiful slower song.  I know, you are all sitting there like – Katie likes a slow song? What? I was surprised too but it is just so calming and well done and it is just the perfect song to end the album on.  Can’t Stop Me Now is another one of my favorites – as it seems to be a bit autobiographical of Rod’s career about how he used to sing in pubs and then Maggie May came along…

If you have been a fan of Rod’s, I don’t think you will be disappointed with this album – it is pretty much what I was expecting it to be and sound like based on the little that I did know of his career and other songs.  If you’re not a fan of Rod’s but are looking for some new music to check out – then I definitely think you should give  this CD a spin, you may be pleasantly surprised with just how much you will love it – I know I was!

I received a free copy of this CD in order to write this review through a campaign for One2OneNetwork.  By posting this review, I am eligible for incentives.  I was not otherwise compensated for this review and all opinions are 100% mine.