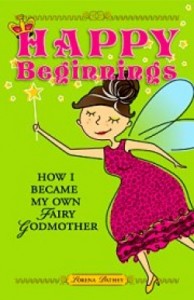 Happy Beginnings is the story of Lorena Bathey.  The book starts with Lorena being told by her husband that he was leaving.  She was shocked and didn’t know what to do.  The book tells about how she overcame this setback of her failed marriage and turned to friends (and vodka) to help herself get through it.  I liked that she was really honest in the book, she takes us through all the steps she went through and how she felt at the time.  I felt like I was at her side throughout the whole ordeal.

After she finds out her husband is leaving, he offers to let her use his flyer miles and she takes a trip to Italy to find herself.  And maybe find love.  And that she does.  She meets a guy named Nicco and they seem to hit it off.  Once she gets back to America, things are still progressing and Nicco is going to come visit.  Her husband wasn’t happy as he was kind of holding out hope she’d go to Italy and come home to be with him again – not come home and be interested in another man.  Things don’t quite work out in this other relationship and Lorena finds herself getting a divorce in her late thirties and trying to figure out how to date again and everything awkward that comes along with that.

Somewhere along the way, she finds out that this was not her unhappy ending but was actually her Happy Beginning!  Lorena stopped waiting around for a fairy godmother to show up and help her out and instead decided to be her OWN fairy godmother.

While I haven’t ever been married so I certainly can’t even begin to know anything about divorce – I really felt like I was involved in everything with how Lorena told her story.  I am also pretty sure there are many, many other women out there who didn’t do anything wrong and as Lorena said in the book – aren’t ogres, but their husbands just decided that they wanted to leave them.  If you know someone going through a divorce, or maybe you yourself are going through one, I recommend this book.  You’ll realize that you are not alone and since Lorena has already been through it all and came out the other end better than ever, you can use her mistakes to learn from and come out better than ever yourself!

Take the wand in to your own hands!

This is the story how Lorena Bathey started over after her fairy tale marriage failed after eleven years. With the stunning declaration made by her husband that he was leaving, she began a journey where she learned loving, loss, friends and vodka were the road map to finding herself. This is a very open and honest account of how Lorena Bathey struggled to find her inner fairy godmother after being made to start over again. She uses humor and insight into the world of the late-thirty divorcee that will bring chuckles, guffaws or tears. Lorena’s story is her own but one that many women are experiencing at this time. She stopped waiting for her own fairy godmother and took the wand into her own hands! You can too!
I received one or more of the products mentioned above for free using Tomoson.com. Regardless, I only recommend products or services I use personally and believe will be good for my readers.