April 4, 2013 by ConcertKatie No Comments 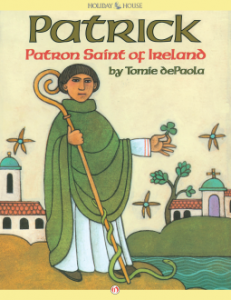 Well, I was hoping that I’d be approved for this book before St Patrick’s day, but unfortunately I wasn’t.  I often find myself wondering just who exactly is St. Patrick and why is he so great that he gets his own day that EVERYONE seemingly celebrates – not only those who are Irish.  This book is by Tomie dePaola who actually also wrote one of my favorite books as a kid, Strega Nona.

The book is only 39 pages, and some of them don’t even have any text, they are just some wonderful illustrations – but that was really all that it took to tell the story of Patrick and why he is now a St. and why he was such a big deal that he deserves to have his own day and lots of parties and green things to celebrate.  (March 17 is significant because it was the day that he died.)

The end of the book also discusses some legends that are related to Patrick – that may or may not be true.  The one that I had heard before was about the snakes, but there were a couple other interesting ones listed that were new to me!

The story of Patrick’s life, from his noble birth in Britain, to his being captured and taken to Ireland by a group of bandits, to the “dreams” that led him to convert the Irish people to the Christian faith. DePaola also retells several well-known legends, including the story of how Patrick got rid of all the snakes in Ireland. Full color.