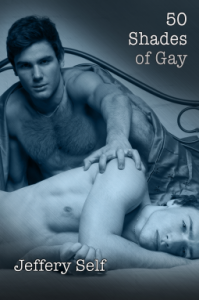 Here I go again with another spin off from the 50 Shades of Grey books.  This book starts out when Matty, who works for a news program, is too sick to do an interview with Taylor Grayson – a hot Hollywood hunk – so he asks his roommate Alex to do it instead.  Alex is tossed in to the room with the cameras and is told he has 4 minutes to do the interview.  It actually reminds me a lot of the Mila Kunis interview that had been going around (when I wrote this and scheduled it – it was news.  Now that this is actually posted it has probably long since been forgotten) with the guy tossed into the interview that ended up talking about his friends and inviting her to a wedding and football match!

Anyway… back to the story.  Taylor is so taken by Alex’s interview that he asks for him to go to his movie premiere and get the exclusive interview with him right after for Matt’s news program.  Alex agrees and takes Matty as his plus one.  Matty and Alex are both gay and are roomies and that’s it. (I guess since the title is Fifty Shades of Gay I didn’t need to mention that, really, but you never know.)

Taylor claims he is not gay, but asks Alex to enter in to a contract with him. (If you’ve read 50 Shades of Grey you know where this is going.)  Alex doesn’t exactly want to, but hangs out with Taylor anyway.  One place he hangs out with Taylor is at a party – where he finds out from Taylor’s publicist that he is actually going to be marrying a model named Natalie and that they would be announcing it very soon on the Tonight Show.  Alex isn’t happy with the news at all, especially with how he finds out about it – not from Taylor.

Some other stuff happens that I don’t want to give away… and Alex is offered a job in New York.  Does he leave Los Angeles and Taylor behind after Taylor took off on him and he thinks its over?  Well, what  Taylor has to say on the Tonight Show may help solidify his decision.

I thought this book was a lot better written than the 50 Shades of Grey books and I really liked the writing style of Jeffrey Self.  I felt like I was in Alex’s head going through everything with him.  The book is also a bit less descriptive than 50 Shades of Grey which I liked as well because let’s face it – 50 Shades of Grey is a bit over the top.  If you enjoyed those books though I think you would really like this one as well, it’s a different dynamic with a guy and a guy involved I think and it makes things more interesting.

Meeting his celebrity crush was one thing, but even Hollywood could not have written what happened next.

Inspired by E.L. James’ international phenomenon, 50 Shades of Grey, Jeffery Self’s 50 Shades of Gay tells the story of a young celebrity blogger, Alex Kirby, who interviews Taylor Grayson, a superstar leading man in Hollywood blockbuster films. Grayson also happens to be a closeted gay man with a passion for BDSM. When Grayson draws the younger man into his private orbit and initiates him into his sexual world, the younger man can tell that kinky sex has shielded Grayson from having a real emotional connection with another man. But he is head over heels in love with the older, powerful, gorgeous man who has selected him for the pleasures of submission. Ultimately, Alex decides to experiment with the power differential between them, and see if he can break through the armor that Grayson and his layers of Hollywood handlers have imprisoned him in. Will he be able to open Grayson up to real intimacy, or will he cause Grayson to end the relationship and cut himself off yet again?

Jeffery Self is a writer and an actor. He co-created and starred in Jeffery and Cole Casserole on Logo, and has appeared on numerous television shows, includingDesperate Housewives, 90210, Hot in Cleveland, and 30 Rock as Randy Lemon. His book Straight People: A Spotter’s Guide is forthcoming. Follow him on Twitter @JefferySelf. You can also visit him online at Jefferyself.tumblr.com.