April 2, 2013 by ConcertKatie No Comments 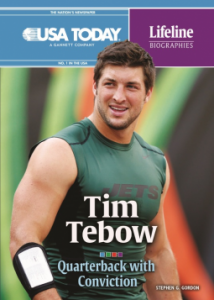 Since this bio is done by USA Today, there are some articles included in with the story and all of the pages look like they came from a newspaper or magazine (which you know I love.)  I learned a lot about Tim – like how he struggled with dyslexia as a kid and had to learn things differently and that while he grew up in Florida, he was actually born in the Philippines!

The biography chronicles his football teams throughout his life, growing up, college, and then on to the pros.

If you are a football fan, sports fan, Tebow fan or just are looking for something to read… check out Tim Tebow from USA Today Lifeline Biographies.

“Tim Tebow is a one-man cultural blitz,” reports USA TODAY, The Nation’s No. 1 Newspaper. A celebrity in the football world and a pop culture phenomenon, Tebow has become a household name. He both “polarizes and mesmerizes” fans with his “unconventional playing style and outspoken commitment to his Christian faith.”

For twenty years, Tebow was told that he didn’t fit the quarterback mold. But fierce determination and an intense will to win earned him the coveted Heisman Trophy as a sophomore in college and a hard-won spot as a quarterback in the NFL. In a short time, Tebow has become a role model for millions of kids. Follow his rise to the NFL ranks in this exciting biography, and you’ll find out why Tebowmania is sweeping the nation.