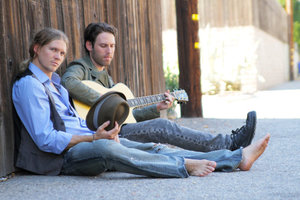 I was recently introduced to Reasons Be – a Los Angeles based band and check out their 4 song EP.  From the opening notes I was loving it.  I love the song Love the Way, that starts off a bit softer but then just keeps getting bigger and bigger as the song progresses.  The two voices sound so great together as well, I can definitely see this EP getting some heavy rotation on my playlists.  Hands Up is very catchy and fun, and it has a great beat to bop along with.

More about the band –

A band, a bond and a brotherhood: Scotty Dickert and R.E.L. are Reasons Be, a Los Angeles-based duo whose debut four-song EP reveals an endearing optimism and a sparkling tunefulness – a resplendent meeting of two musical minds.

This partnership began on the online marketplace Craigslist, when R.E.L answered an ad, posted by Scotty seeking a guitar player. It was a promising meeting; the duo immediately conceived their first song.

“He was the first and only guitarist we auditioned,” Scotty remembers. “Fate? The musical chemistry was instantaneous.”

Both Reasons Be members bring significant individual histories to the alliance. R.E.L endured a rough upbringing. After his mom died under tragic circumstances leaving his family in shambles, he found solace in music. He came to Hollywood to enroll in the Musicians Institute’s Independent Artist program; a move driven by his affinity for American artists – Dave Matthews Band, Jason Mraz and John Mayer – and his desire to relocate to a more fertile musical market.

Scotty, a native of Milwaukee, WI, had fronted a band from his hometown that performed together for seven years and had music featured in films and on MTV. When the band broke up he made immediate plans to head for Los Angeles. This move served dual aspirations: in addition to his musical endeavors – fronting a succession of bands and writing songs – Scotty is also an actor who has been cast in a variety of roles as a hippie sex toy, a super hero, and of course a rocker in a slate of commercials, television shows and independent features.

Centered on vocals and guitar, Reasons Be’s EP is a faithful representation of their live sound paired with the studio craft of Lee Miles (Puddle of Mudd, Rise Against, Shinedown). The accomplished producer-engineer embellishes the duo’s acoustic core with a pop-friendly studio sheen. “He is quite the visionary,” Says R.E.L “He opened doors we would have never imagined.”

Ultimately, Reasons Be is a creative democracy. R.E.L and Scotty come up with individual song ideas and email these to each other. Scotty often focuses on lyrics and melodies, while R.E.L elaborates on the musical blueprints. Meeting up for regular writing sessions, they then advance these concepts. “In previous bands I felt like I was doing all the work,” says Scotty. “Now, the more opinions the better.” Although they eventually see eye-to-eye, the duo affirms that healthy dissent and subsequent resolution often leads to a stronger song. “And if it comes down to it, we’ll wrestle to determine who wins,” laughs R.E.L

Two voices, one destiny: In their song “Hands Up,” Reasons Be evokes an inviting destination with the lines, “You’ll find a place where everybody knows your name.” This affirmation defines their journey as well, as Reasons Be is becoming known and appreciated for their compelling songs and winning chemistry. “The music that comes from our partnership is far better than what Scotty or I could come up with on our own,” concludes R.E.L “And it’s very rewarding.”