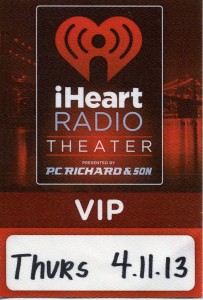 Last week, Hanson had announced they would be doing a private show in New York City for about 200 people and the only way to get in was to WIN.  I knew that I had to find every contest that there was out there to enter, but it turned out that ClearChannel reached out to ME because I run a Hanson site (www.hansonstage.com) and asked if I would like to attend!  Of course, I said yes.

The show was set to kick off at 7pm and stream live on iHeartRadio’s website.  We got there a little before 6 and shortly after were let inside.  Over the loud speakers they were playing Hanson’s new album – ANTHEM – which will not be out until June!  As much as I wanted to pay attention to all of the songs, the place was loud and it wasn’t that easy to actually enjoy the album in it’s entirety but from what I did hear, it is going to be their best album yet.

Z100’s Eric America introduced the band and shortly after there were Isaac, Taylor and Zac on stage – in suits!  They never have really “matched” on stage before and they looked sharp!  I’m not sure if this is going to make its way to the tour though because Taylor was absolutely dripping in sweat and even commented that this is why he never wears suits on stage.   They did a set of 11 songs, 6 of which were new songs from ANTHEM (although only 2 were new to me because they did premiere a couple for us in Jamaica in January.)

They kicked off the concert with the new song “Fired Up” and I think it was a great start to the show, even though most of us didn’t know all the words yet. (I say yet because they did a live stream a couple of nights ago where they performed the song, so we weren’t all completely unaware of it.)  The second song was I’ve Got Soul which was new for everyone, I don’t remember anything specifically about it – but it was good.  Then they did the new single, Get The Girl Back and Taylor made a comment about how we know it now.  (Get The Girl Back is available on iTunes for $1.29 – which includes the song AND the video which features cameos by Nikki Reed, Kat Dennings, Drew Seeley and Drake Bell…)

Get The Girl Back had been stuck in my head since the video premiered and this performance did nothing to help that as I cannot stop singing the “it’s about tiiiiime…” part, constantly.  The next new song they did was Cut Right Through Me which they premiered acoustically on AXS Live earlier in the week.  (They were on TV or streaming almost every day last week and it was far too much for me to keep up  with – but I do have it all on my DVR waiting for me to find some down time!)

Then they went through a few of their older songs – starting with Penny and Me, Thinking Bout Somethin, Give a Little, If Only and MMMBop.  The band is now 21 years old and MMMBop was released 16 years ago!

iHeartRadio will be posting some highlights from the show some time soon at http://www.iheartradio.com/hanson so keep an eye out for that!  The ANTHEM World Tour kicks off June 17 in New York City and will be hitting up South America and then North America so be sure to check out the dates for that (I have a link to them in my sidebar!)  and ANTHEM will be released on June 18th in the US and you can preorder it in a number of different packages on Hanson.net