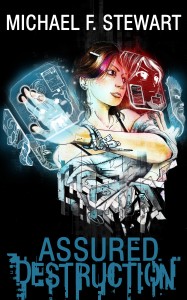 Assured Destruction is about a high schooler named Jan.  She works at her mom’s business where she is supposed to shred hard drives and recycle computers.  Except that she keeps a few of the hard drives and creates online identities for them on a website she calls ShadowNet.  They even have twitter and facebook identities.  She protects herself, or so she thinks, behind a firewall and doesn’t think that anyone knows about what she is doing.  Next thing she knows, bad things start happening to the people whos hard drives she has on ShadowNet and she is responsible.  If the police find out – she’s toast and so is her Mom’s business since they are supposed to be trashing these harddrives, not keeping them and looking at their contents.

Things in Jan’s life end up getting a lot worse before they can even try and get better and she ends up finding herself in some deep trouble – both at school and with the police.  She tries to track down on her own who is doing this to her, and has a few ideas.  Of course – on top of it all there is the typical high school drama and cyber bullying – and is it possible that there are now TWO guys interested in Jan as more than a friend?

I absolutely loved this book – as a bit of a computer geek myself I was amazed with all that Jan was able to do – coding a virus in 20 minutes, creating iPhone apps! And I was really rooting for her to figure out what was going on and bring the bad guys down.  This is the 1st book in the Assured Destruction series and I am very much so looking forward to the rest because all this computer and coding and techy stuff is right up my alley!

Sixteen-year-old Jan Rose knows that nothing is ever truly deleted. At least, not from the hard drives she scours to create the online identities she calls the Shadownet.Hobby? Art form? Sad, pathetic plea to garner friendship, even virtually? Sure, Jan is guilty on all counts. Maybe she’s even addicted to it. It’s an exploration. Everyone has something to hide. The Shadownet’s hard drives are Jan’s secrets. They’re stolen from her family’s computer recycling business Assured Destruction. If the police found out, Jan’s family would lose their livelihood.

When the real people behind Shadownet’s hard drives endure vicious cyber attacks, Jan realizes she is responsible. She doesn’t know who is targeting these people or why but as her life collapses Jan must use all her tech savvy to bring the perpetrators to justice before she becomes the next victim.

After crewing ships in the Antarctic and the Baltic Sea and some fun in venture capital, Michael anchored himself (happily) to a marriage and a boatload of kids. Now he injects his adventurous spirit into his writing with brief respites for research into the jungles of Sumatra and Guatemala, the ruins of Egypt and Tik’al, paddling the Zambezi and diving whatever cave or ocean reef will have him. He is a member of the International Thriller Writers and SF Canada, and the author of the Assured Destruction series, 24 Bones, The Sand Dragon, Hurakan, Ruination and several award winning graphic novels for young adults.
Amazon paperback ($8.99)
http://www.amazon.com/dp/098126994X?tag=tributebooks-20