The first time they were sent down, Irish lives were led. Emily, the angel, ended up embedded in murder and lost in the realm of true love. While Matthew, the warrior, took over a life that left blood on his hands and anger in his soul.

With their second coming, Emily found herself facing an oncoming war that brought her to the shores of America. While Matthew tried desperately to unveil the evil character of a young man who was intent on locking his partner in a ‘gilded’ cage.

Now…Emily and Matthew find that their lives are all their own. Yet, all the memories, hatred, longing and regret have come hand-in-hand with this newfound freedom.

In small town U.S.A., Matthew finds himself loving his new life. From his military school existence to a new, ‘odd’ friend who’s arrived in town, Matthew’s looking forward to graduation and heading off into a brilliant future with Emily by his side.

Emily wants nothing more than to hide. Although doing her best to fit in, she lives a life on the edge, wondering when her past love with reappear to either forgive or seek revenge on the angel who let him down. Battling the shadows that seem to be breaking her soul in two, Emily soon discovers that her small, quiet town has a secret that’s beyond dangerous…

As she and Matthew join forces to help a ‘haunted’ victim, they open the door on a mystery neither of them can believe. A true villain has returned from the past, and not even their heavenly family will be able to save them. This time they’re on their own, as they face a fight that could lead them straight to Hell…and end the angel/warrior team forever.

Without a word, Matthew reached out, took Emily by the hand and pulled her down beside him. He looked into her eyes and smiled. “I knew my Emily was still in there.”Out of the blue, the room became incredibly hot, as if Gabriel had entered in order to give a lesson to his favorite students. “What?”

“That spark.” He pulled Emily’s face closer before she could push herself away. “You’ve been acting all this time like you’re just here to sit and wait it out until you’re lucky enough to go Home. But you’re still in there, Emily. You still have all that energy and belief in there and you want to do something. That’s the partner I know.”

Shaking her head, Emily listened to her own breathing intensify as she stared at his full lips and wondered why she felt so completely and utterly strange…vulnerable even. “I want to help this girl. This is a job, maybe my only job down here. She saw a ghost and she wants me to help her out, that’s all.”

“And you will.” Matthew captured Emily’s lips, and she could no longer feel the breath in her lungs. Completely different than the one kiss they’d shared up above so long ago, this one was far more demanding, as if Matthew was a young man determined to kiss his human love for the very first time.

Sitting back, Emily practically jumped off the bed.

“I’m sorry,” she heard him whisper behind her. “I guess I was just excited to see you again.”

Not trusting her voice, she remained silent.

“We have jobs, but we also have a life to live. Our own lives this time around. Maybe you should think about adding that into your angelic plans.” Matthew continued softly, “Jason isn’t here, Emily.”

The name being said out loud sent a chill down Emily’s spine. It reminded her of the vow she’d made a long time ago—a vow that an angel couldn’t break.

She cleared her throat. “It doesn’t matter if he’s here. We were sent to do a job, and maybe helping this little girl prove her story is what I need to begin.”

Standing up, Matthew looked as if he was a man who wanted nothing more than to turn back the clock and erase the name he’d spoken aloud. He walked to the open window. “Well, I hope the job goes well. Good luck with it.”

“Matthew,” Emily took a step toward him. “Don’t leave like this.”

He nodded at the book on the bed. “You have your mission, Emily…your job. Ghosts, goblins, lost souls—knock yourself out.” He took a deep breath. “I wonder when you’re going to figure out that the living souls around you would like some of your attention as well.”

Closing her eyes, Emily shed silent tears as she heard his feet hit the ground beneath her window. A friend, a partner, the one who actually listened, was now just an angry young man racing back to The Armory—a place where warriors reigned.

Emily sighed. She’d done it again. No matter how hard she tried to be good, her mouth always got her into trouble. She needed Matthew to understand. She’d made a promise to a young man a long time ago; a promise that was supposed to last for eternity. How was she to know at the time that their eternity would include death by her hand?
Had the second time around broken their vow? Emily had no idea. But whatever happened she could not and would not offer Matthew her heart if payment was still due for her past sins. Above all, Matthew was the last person who deserved to be punished for her mistakes.

Amy Lignor began her career at Grey House Publishing in northwest Connecticut where she was the Editor-in-Chief of numerous educational and business directories.

Now she is a published author of several works of fiction. The Billy the Kid historical The Heart of a Legend; the thriller, Mind Made; and the adventure novel, Tallent & Lowery 13.

She is also the owner of The Write Companion, a company that offers help and support to writers through a full range of editorial services from proofreading and copyediting to ghostwriting and research. As the daughter of a research librarian, she is also an active book reviewer.

Currently, she lives with her daughter, mother and a rambunctious German Shepherd named Reuben, in the beautiful state of New Mexico. 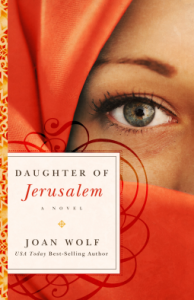 I first heard about Joan Wolf, the author of Daughter of Jerusalem, because she lives in the same town that I grew up in.  My mom had found out that some of the ladies where she worked were going to be doing a book club and the book was one of Joan’s other books.  Joan started out writing romance novels and then branched off into Biblical Fiction which is a pretty interesting genre to me.

Daughter of Jerusalem focuses on Mary Magdalene, and it is interesting to see how Joan describes everyone versus the ideas I may have had already from their presence in Bible stories.  She definitely has a way with words and I really enjoyed reading this book.  I am not sure that I will continue to check out more books in the biblical fiction genre, but I wouldn’t turn down the opportunity to read another Joan Wolf book.

In Daughter of Jerusalem, readers will quickly identify with Mary Magdalene– a woman of deep faith who used her wealth and influence to serve Jesus. This fictionalized story of Mary Magdalene is, in the truest sense of the word, an inspirational novel for modern people who are looking to renew in themselves the message of Christ. It’s the greatest story ever lived, told by one of the most famous women who ever lived, and it’s a page-turner. Joan Wolf’s years of success as a novelist enable her to combine storytelling and a faith plot in this beautifully written biblical fiction.