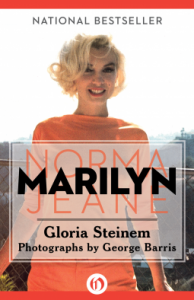 Marilyn is Gloria Steinem’s take on a biography of the celebrity Marilyn Monroe.  The book is rather short and sweet, just over 100 pages.  I had never read much about Marilyn before, just knew what I knew from reading quotes or hearing stuff here and there on  TV. I thought the book did a great job at expanding on everything that I thought I had known, and of course included much more detail on things I hadn’t heard about either.  It is easy to see why the book was a Bestseller – it is well written but also because Marilyn was so beloved and had such a tragic end to her life.

There are 8 chapters – About the Book, The Woman Who Will Not Die, Norma Jean, Work and Money, Sex and Politics, Among Women, Fathers and Lovers, The Body Prison, Who Would She Be Now? which each talk about different aspects of Marilyn / Norma Jean’s life.  I particularly liked the story when someone asked for her autograph and she asked them how to spell Marilyn Monroe!  Could you imagine being that person? I’d have thought I was with an imposter! 😉

The book also contains a bunch of photos in an Image Gallery at the end of the book.  All of the photos were taken in June and July of 1962 and it looked like she was really enjoying herself at the shoots!

Gloria Steinem’s insightful and uniquely sensitive account of Hollywood’s brightest star from the Golden Age
Few books have altered the perception of a celebrity as much as Marilyn. Gloria Steinem reveals that behind the familiar sex symbol lay a tortured spirit with powerful charisma, intelligence, and complexity. The book delves into a topic many other writers have ignored—that of Norma Jeane, the young girl who grew up with an unstable mother, constant shuffling between foster homes, and abuse. Steinem evocatively recreates that world, connecting it to the fragile adult persona of Marilyn Monroe. Her compelling text draws on a long, private interview Monroe gave to photographer George Barris, part of an intended joint project begun during Monroe’s last summer. Steinem’sMarilyn also includes Barris’s extraordinary portraits of Monroe, taken just weeks before the star’s death.