Book Review: A Dream So Big 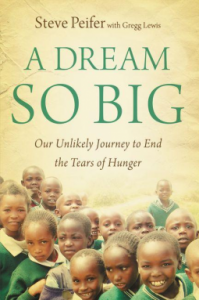 A Dream So Big is told by Steve Peifer about the time that he and his family spent as missionaries in Africa.  They had decided to go after their 3rd son was born, but unfortunately only was able to live for 8 days due to a chromosomal condition.  The Peifers were aware of this condition during wife Nancy’s pregnancy but chose not to abort their son and instead hope for the best and put it into God’s hands.

Steven and Nancy spent a year as dorm parents at a boarding school in Kenya.  Their sons, Matthew and JT went along as well.  It is heartbreaking to hear about the situations that are going on in Kenya and how excited they get to receive what anyone in America would consider “next to nothing”.  There are fees for the children to go to school and most parents can not even afford food for their family (and even then most eat only 1 meal a day) let alone to have any money left over to send their children to school.  Without an education, it will be hard for these children to have many opportunities to advance.

They also visited orphanages and delivered meals to nearby neighborhoods.  The stories they tell make me want to figure out more ways to help. (I sponsor a child in Africa – Sierra Leone – through World Vision).  Their church back home sent them lots of care packages to distribute and then had to deal with bartering with those who had the packages in order to be able to pick them up.  A lot of times they asked for ridiculous amounts of money for the packages and Steve would have to figure out ways to get them to come down in their prices so that the supplies could be used for the children.

After spending a year, it was clear that the family wanted to go back at some point, but Steve had landed a pretty good job and decided to stay in America and work.  He then had a moment in Vegas where he decided that he should be back in Africa and the family decided to go back this time for four years!

While back in Kenya, he and Nancy discussed how he had always wanted a daughter.  They went to the local orphanage to see about finding a daughter and actually found twins – a boy and a girl – that they wanted to adopt.  They started out fostering Katie and Ben and later ended up adopting them – on their son Stephen’s birthday.  They definitely took it as a sign from God that this is what they were supposed to be doing.

Steve also set up a program to get food at schools for a year.  He was able to raise enough money to provide a meal to all the students at several schools and it helped the community greatly.  Kids were able to learn better with full bellies and not crying or about to faint becuase they were so hungry.  He also worked on setting up computer labs at the schools too to help give the kids more skills they could use.

While this book took me forever and a day to read (it is just over 300 pages) I absolutely loved it.  The things that this family has done, though they may seem insignifigant to some, had a HUGE impact over in Kenya and their son may have only lived for 8 days – but the impact that he had on his family’s life is responsible for the impact that they made over in Kenya.  A truly inspiring story.

I received a free e-copy of this book from the publisher through NetGalley in order to write this book. I was not otherwise compensated.

A Dream So Big is the story of Steve Peifer, a corporate manager who once oversaw 9,000 computer software consultants, who today helps provide daily lunches for over 20,000 Kenyan school children in thirty-five national public schools, and maintains solar-powered computer labs at twenty rural African schools. Steve and his wife, Nancy, were enjoying a successful management career with one of America’s high tech corporate giants during the dot-com boom of the 1990’s when, in 1997, he and his wife Nancy discovered they were pregnant with their third child. Tragically, doctors said a chromosomal condition left their baby ‘incompatible with life.’ The Peifers only spent 8 days with baby Stephen before he died. Seeking to flee the pain, Steve and Nancy began a pilgrimage that thrust them into a third-world setting where daily life was often defined by tragedy—drought, disease, poverty, hunger, and death. They didn’t arrive in the service of any divine calling, but the truth of their surroundings spoke to their troubled hearts. A short-term, 12-month mission assignment as dorm parents for a Kenyan boarding school turned this ordinary man into the most unlikely internationally recognized hero, and his story will inspire you to pursue similar lives of service.