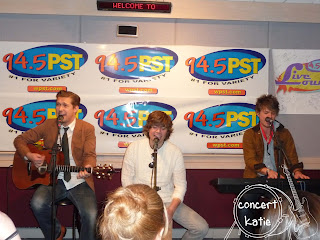 Yesterday Hanson performed for contest winners at WPST in Princeton, NJ.  My friend Kim won her way in and invited me as her guest!  We were expecting there to be 30 winners (therefore 30-60 people) but they only had 10 winners and a guest each for 20 people.  Except that 3 winners didn’t even show up so there was only 14 of us! (And a couple extras got added in just before Hanson performed) 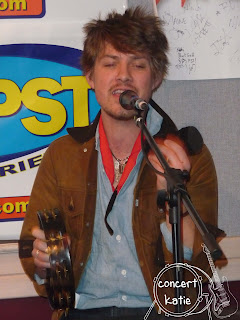 In usual Hanson fashion, they were late. We were put in a conference room for a bit and we assumed this meant that they only had one entrance to the station and they didn’t want us in the lobby when Hanson arrived.  Then we were moved into the “lounge” which was just a small room with 3 rows of chairs (In the random draw, Kim drew 2nd row for our seats) and shortly after Hanson came in the room.

They did 4 songs – Thinking Bout Something, These Walls, Where’s The Love and Give a Little.  Before These Walls, they were talking about jughandles.  For those of you who don’t know, in New Jersey (I am not sure if it is all or just some areas) you can’t make left turns instead you turn right to go left.  I believe it is done because it is safer and causes less accidents this way but if you are not used to this concept it can be VERY confusing.  (Especially if your GPS says that the location is on the left and you are not prepared by being in the right lane!)  Taylor ended up singing a bit about jughandles in the song, which led to him completely messing up the song a couple of times, but it was so funny no one seemed to mind. 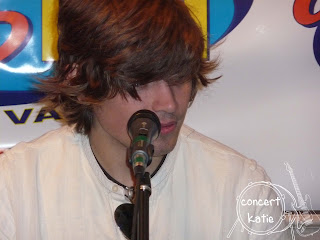 Taylor also explained that he got a new, smaller keyboard instead of his professional best recording interface and keyboard, for when they travel and it has a TON of buttons on it, so he was hitting a few and Zac started dancing.  I swear, Taylor hits a button by accident on his keyboard all the time – and it always leads to Zac either dancing or making up a ridiculous song.

They took a few requests, but unfortunately most of them were not songs they were able to do acoustically so they had to turn them down (Georgia, Dying To Be Alive, Runaway Run) and they ended up doing Where’s The Love. Their last song was their latest single, Give a Little. 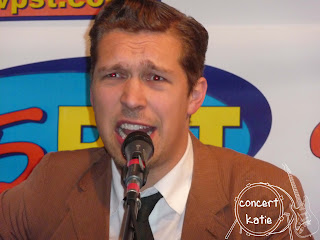 After they performed, we were taken out of the room an walked around the studio in a loop (jughandle?) and lined up to meet the guys.  We were able to get something signed and a photo of just us with them which is a VERY rare thing and very awesome 🙂

Zac ended up taking my CD from my to sign first… and then dropped it on the floor.  Isaac had it and was ready to sign but was talking to Kim about Boomerang (their first album which she was having them sign) and then Taylor went to grab it from him to sign but Isaac grabbed it back because he hadn’t yet signed it.  Then Taylor got it and asked my name and added a “To Katie ROCK ON” to it! 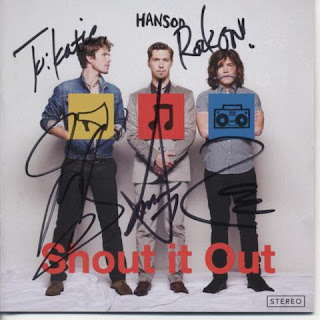 We went down in to the lobby and chatted a bit with some other fans who were there, and a few minutes later food went by so we assumed Hanson would be staying to eat at the station.  But instead,  they came downstairs a few minutes later and said hi/bye and went out to their car.  We followed them and they all walked past my car – Zac had parked their van just a few spots over from my car so he had to drive right by me to leave.  I am not sure why that was so exciting to me, maybe because I did not have much sleep – waking up at 6:15 to get ready to go after falling asleep at who knows when! (After 1am, for sure)

Overall it was a really fun day and I am glad that Kim invited me as her guest 🙂  Even if being stuck in ridiculous traffic for 45 minutes when you are super, super tired can be considered a form of torture – it was worth it!

Sometimes I like to read Ryan’s teleprompter with him “Good Evening! And Welcome To American Idol!”  This week the Idols sang songs from their Idols. I do really hope that they continue to use genres in the future – how great would it be to hear Scotty coutry-fy an R&B song? Although I have read that it might be one of the things that they drop with this new season.  I guess we’ll just have to wait and see! The Idol’s Idols was almost “too easy” of a subject.  But it is just the beginning of the competition so I guess I will let that slide.

I think most of the contestants did really well this week.  I actually can not decide on a bottom 3, so I have a bottom 4.  I know, I know, that’s cheating! But it is my blog so I can do whatever I want! 😉  The 4 are – Naima, Ashthon, Stephano and Paul.  I am not sure America really “gets” Paul, though I do enjoy him.  (Although his dance moves were a bit odd.  But it was hilarious when Ryan tried to imitate them!)  The judges seem to love Ashthon, but I don’t seem to hear what they are hearing.  I think Naima didn’t make the best choices last night, which is a shame, because I really like her.  And Stephano… my favorite… but he took on a song that was too big for him AND it said “Goodbye” in it, which can often be the kiss of death on this show. (I have had a running theory about this for years so last night my mom yelled out “HE SANG GOODBYE!” as he was singing lol)

According to DialIdol, 2 of my 4 are “correct”… but I am still not sure how they are taking into account the online votes. And they usually are not that accurate in the beginning of the season but I guess we’ll just wait and see.  They have Paul and Ashthon in the bottom 4 – with Casey (what?!) and Haley. I can see why people weren’t into Haley’s performance – the “yodeling”, even though that is how the LeAnn song goes! (I never did like that song)

Under the cut are my raw notes from as they were performing.  I was VERY sleepy last night (details on why are coming up later today)So I hope they at least make some sense 🙂

Lauren – Shania Twain – I think she was going a little too fast for herself in the beginning and got out of breath, but then she seemed to find her way. I agree with Steven that she could have done more with the song, but I don’t think she was bad.

Casey – Joe Cocker – I think this was a perfect choice for him.  Though I am not sure why he had so many backup singers.. I get the whole “friends” thing but I just didn’t think it was needed.  Seems a bit early to be pulling out stops like that but I guess I should realize that things aren’t the same as they were in the past.

Ashthon – Diana Ross – Not impressed with her… she might have picked a song that was too big for her. (And I just realized her name is spelled Ashthon and not Ashton…)

Paul – Ryan Adams – He has an interesting stage presence. And I’d like to know how he has such white teeth haha  I’m not sure I liked his performance this week, it could be because I am not familiar with the song he chose.  It was a bit of a down song too – I think I’d like him more in a more upbeat setting.

Pia – Celine Dion – Pia is the real deal. At first I was hesitant with her artist choice because Celine is one of those that is tough to sing and I think Pia did the song great justice and combined with last weeks performance I think she’ll go far in this competition.

James – Paul McCartney – He was good. Again. Darn! And he seemed to keep his Adam screeching under control too so bonus points there from me.

Haley – LeeAnn Rimes – Ok when the spoiler list first came out everyone was like “omg Haley will yodel” but.. that is how the song goes so I am not sure why that was such a shocker lol I thought she did good.

Jacob – R Kelly – I’m again not a fan of the extra singers. For the finale, fine. But the first round? I want to hear Jacob! I feel like he had some off moments, but for the most part did well.

Thia – Michael Jackson – She is a good singer but I don’t know if I liked this song for her. I don’t think it will keep her from advancing though.

Stefano – Stevie Wonder – Stevie is another one that is hard to sing. I think this song was a bit too big for him – but he is still my favorite (Even if he sang goodbye which is always the jinx! UT OH!)

Karen – Selena – I wasn’t really wowed with her performance, but I didn’t hate it either.  There are definitely stronger girls in the competition. (despite what JLo said after I typed this out lol)

Scotty – Garth Brooks – I actually opted to get dinner during his performance but from what I heard it was a safe choice for him and I’m sure it’ll get him through.

Naima – Rihanna – Not all that impressed with her performance. I think she either should have changed the song completely or just did it the way we are used to. It is always a challenge to do a “current” song.