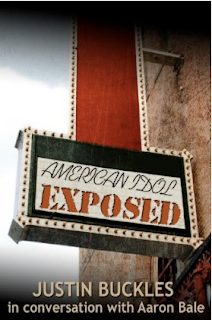 I am not sure where I ended up reading about this book, maybe at Vote For the Worst, but for the past couple of weeks I have had it bookmarked on Barnes and Noble’s website and have been debating purchasing it for my Nook.
I opted to first download the “sample”, which generally is the first few chapters of the book.  However, this sample was 262 pages! At first I had thought there was some mistake and I had gotten the whole book as the sample, but then I made my way to the end of the sample and it ended in the middle of a sentence.  I went back up to the Table of Contents and I had roughly *90* more chapters to read. (Some chapters were only a paragraph or two.)
However, there was nothing all that interesting in the book that is tempting me spend the $3.99 to find out the rest of it.
The idea of the book is that Justin Buckles worked on the show American Idol for several seasons and he knows a lot of the “behind the scenes” drama that went on. Except most of the drama, was exactly that – going on with people behind the scenes.  In the 262 pages I had read there was mention of the Paula/Corey Clarke drama, something about Kim Locke dating someone on the show which I had never heard about before, the Clay/Ruben drama and a very, very long chapter on Diana DeGarmo’s mother. (Surprise! She was a stage mother)  Everything else was about the crew doing drugs and how nasty the higher ups were to people and how he stuck around despite being sworn at and belittled pretty much every day.
I can’t say that I would recommend this book, but it is rather inexpensive if you have $4 laying around and are looking for something relatively easy to read for your Nook or Kindle.