Book Review: The Shape of Mercy by Susan Meissner 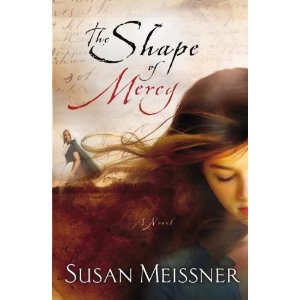 The Shape of Mercy is three stories all intertwined in to one.  We first meet Lauren Durough, who is the only child to a man who wanted a son to carry on the family legacy.  Desperate to break from her family’s expectations, she takes a part-time job although she does not need one.
Her boss is Abigail Boyles, an eighty-three year old retired Librarian.  Abigail has a Diary that was passed down through her family for many years that was written by Mercy Hayworth who lived in Salem during the witch trials.
Lauren’s job is to transcribe the diary from the hundreds of year old diary of Mercy.  She goes to Abigail’s several nights a week to work on it and quickly becomes consumed with the story. (read more about transcribe anywhere here)
I, like Lauren, also became consumed with the story.  At the beginning of each chapter there are several excerpts of the Diary written which tell Mercy’s personal account of the Salem Witch Trials.  It was very hard to put this book down once I started it, which made for a couple of late nights for me over the past few days!  I was just so into the story – all of the stories! and I wanted to know what happened right away, even if it meant staying up all night.
You might assume that you know what is going to happen if you had read or heard anything about the Salem Witch Trials, but Mercy’s story, as well as Abigail’s and Lauren’s all have many surprising twists and turns that you most likely won’t see coming. (At least, I didn’t see a lot of them coming!)
Now that the book has ended I find myself wanting to know more! I definitely recommend this book if you are into Contemporary Fiction and/or Historical Fiction.  It is a pretty quick & easy read and is a great story (or three).


I received this book for free from WaterBrook Multnomah Publishing Group for this review. I was not told what to write and I was not monetarily compensated for my review.

What was your favorite class in college?


My favorite class had to be The History of Rock N Roll.  I took it in the summer and it met twice a week in the morning.  I don’t think it was all that early in the morning, but I did often show up half asleep after going to concerts the night before and the professor thought that was awesome so he was never mad at me about it. Plus, at least I showed up! (Funnily enough, the one class I did end up missing – he missed too! Apparently he just never showed up so the class waited like 10 minutes and left. Talk about lucky!) I could have stayed home in bed.  And one week we were talking about Little Richard and Hanson had just started covering “Rip It Up” around that time so I asked him about it and he played it for the class and then asked me if Hanson changed any of the lyrics.  They didn’t.  He was impressed.

The class had nothing to do with my major or minor, but it counted towards the general electives that I needed to take.  I believe it was for History, which is a subject I am not that great with since it is basically all memorization of dates and names. (Although, the one actual History class I took was all essays and not multiple choice “what year did this happen?” and I did really well in it)  We even had to write out certain notes on our midterm and final which surprisingly I did pretty well with, though I don’t know if I actually retained any of that information.