Got more Get Glue stickers in the mail, except this time things were a bit confusing!  When my last set came I told my brother that he should put in for his stickers too. And he did.  The only problem is, Get Glue addresses the stickers to “Get Glue Fan” and since we have 2 Get Glue Fans in this household now, things will get a bit complicated!

On Friday, a package of stickers came in the mail and it had 6 stickers in it.  3 Generic glue hearts, a Dexter and 2 of the Get Glue accomplishment stickers – Night Owl and Check In Rookie.  My brother said that these HAD to be his because he put in for them last time when I told him to, except that my month was up just a few days later so I put in for more of mine to be mailed as well.  Since he likes Dexter and I didn’t particularly care for the getglue stickers I let him keep them, telling him that when the next package came in probably a few days it would be mine.

On Saturday – we got TWO packages from Get Glue so we each grabbed one and then did a bit of trading.  He kept White Collar and Psych, shows he watches regularly.   I had 3 Dexter stickers in mine, one he already had, one I already had and one no one had, but I gave those to him keeping the one he had already. (And I also had the owl and check in rookie that he got the day before) The other 4 pictured – House Hunters, Sex and the City 2, E:60 Rookie, E:60 All Star and Pretty Little Liars were all from my brothers set that he gave me.  I also got duplicates of the Gorillaz characters so I gave those to him.

The stickers in this scan are a bit of a hybrid between the two packages we received! Now we are trying to figure out how we can tweak our address when we type it in so that it will still be delivered to us, but will have something different in it somewhere so we know which package belongs to me and which to my brother. 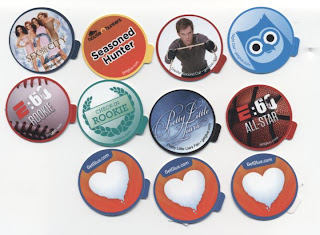 This week I am joining up in the Lower your Alexa Weekly Hop!
I just installed the alexa toolbar last week and have been fascinated checking out the different rankings of the sites I visit on a day to day basis!
I am hoping this blog will help lower my ranking, as a couple of review sites keep denying me products because my ranking is too high 🙁