I joined up with Let’s Get Social blog hop for this weekend! 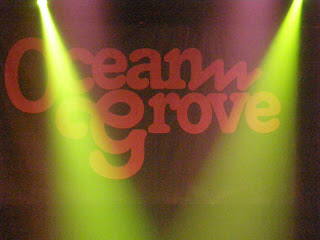 Ocean Grove might look familiar to you, especially if you have ever been to a Jonas Brothers concert. The 4 guys who are usually backing the Jonas Brothers and helping them round out their sound have formed their own band.  Jack, Greg, Ryan and John recently released Ocean Grove’s debut EP, “Little Record”  Last month they played their debut show in Los Angeles, CA and last night they played their first East Coast show at the Gramercy Theater in New York, NY.


Kicking off the show was a band called Meadowland, made up of 4 teenagers.  I wasn’t really into them, but the lead singer gets bonus points for mentioning all the song titles before singing them. (Although I did not start keeping track of them until the end of their set so most of their setlist is from memory and therefore has no guarantees of being accurate!)  Jackie, the lead singer, was really working the stage – as some times I completely could not see her because she had run off to interact with fans.  You can check out more at their website: www.meadowlandband.com and they have a free download available on their facebook page!

Next up was The Prigs, a band from Brooklyn.  They had 2 saxophone players in the band, which was awesome.  They were incredibly high energy and really got everyone pumped for Ocean Grove who would be coming up next.  They had a setlist at the soundboard so some of the song titles mentioned might be abbreviations.  They have a few songs available for download at their website, www.theprigs.com.  If you like what you hear be sure to donate to help keep the band going!  I think that they won over a LOT of the crowd, as after the show they were getting a lot of screams from girls as they were walking the M&G line promoting their website.

Then it was time for the main event – Ocean Grove!  There was some trouble getting the banner to hang even behind them on the stage and one of the guys at the soundboard actually turned around and asked us if we thought it looked ok.  At that point, it did, but then it seemed to drop a bit right after!  Finally, they got it looking like a good backdrop!  The band opened up the show with I Want You In Love.  I recently purchased their EP on iTunes but hadn’t yet had time to listen to it, so I really was not familiar with any of their stuff (save for what my friend Christine had played for me when we were in her car a couple weeks ago) But I definitely liked what I heard and am looking forward to them releasing more material! 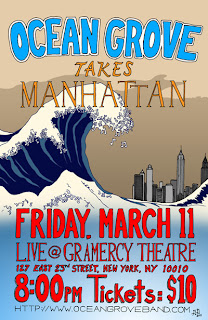 They did a cover of the Beach Boys God Only Knows which was dedicated to their friend and bus driver Kenny who passed away a few weeks back as well as to those in Japan who have been affected by the earthquake and Tsunami.  They also were donating $1 from each poster sold to the Red Cross. (The poster, designed by Greg had a wave on it crashing into the beach from the iconic Japanese painting The Great Wave off Kanagawa)

Then they said they had a surprise for us that the kids in Los Angeles didn’t get because they are spoiled.  A lot of fans thought that they might be calling the Jonas Brothers to the stage (Kevin and Joe were there) but instead they brought The Prigs back on stage and they all did a great cover of Bruce Springsteen’s “Born To Run”

Since the band had mentioned several times they wanted to meet everyone after the show, we decided it might be in our best interest to get in line for the M&G before the show was over so we wouldn’t have to wait too long to meet them.  We weren’t the only ones with this idea so we were sent outside to wait where the line began wrapping around the block.  Once the line started moving things moved quickly, although it was incredibly unorganized.  We were told time and time again that they were only allowing group photos, no matter how big our group was – yet somehow they yelled at me for my photo before Lauren was even up to the guys in line so we managed to get solo photos with the band… except there was so much confusion because another girl had hopped in line in front of Lauren that the photographer took a pretty crappy photo for her and somehow it came out dark and blurry 🙁

We somehow managed to juuuust make the 11:22 train, which of course had no seats.  We walked through a million and one train cars looking for seats and finally decided to just stand until the first stop and hope that enough people got off that we could grab a seat. That worked, although my wrist was so twisted from holding on for dear life that I think it will be a couple days still before it is back to normal.  Then before one of the stops the car went dark and we were stopped.  It didn’t look like we were at a station.  It turned out we had lost power from the overhead wire and the crew had to get downtown to get it back up and running again.  We were stuck for about a half an hour with 3 dumb drunk guys who were trying to pry open the train doors.  When power went back on as they were getting a door open they decided it was them who fixed the train.  Have another drink, guys!

Setlists for all 3 bands under the cut… photos and perhaps some video will be coming soon. I’m heading out for the afternoon so it probably won’t be posted until tomorrow 🙂

Meadowland
Boyfriend
Lovesick
Are You Gonna Be My Girl
Over You
Girlfriend (?)
Rock N Roll Highschool
Mr Right

So far, the Amazon $10 gift card giveaway will still only be having 1 winner drawn because only my twitter is at 100+ followers.  However, facebook is very close and needs only 18 more people to ‘like’ and Google Friend Connect is 25 followers away from the big 1-0-0!

If anyone happens to host any blog hops/facebook hops or knows of any good ones – please leave a comment with the details! I just love a good blog hop and it will hopefully bring us that much closer to the goal and 3 winners!

I went to check out Ocean Grove last night and decided since their new EP “Little Record” was just released recently, that the bonus entry word is “Little Record”!  All you need to do is leave an additional comment containing “Little Record” on the Giveaway post (click the “Giveaway” button to the right –> to get to the post)  The mandatory entry still must be done first in order for any other comments to count in the contest.  The Bonus Entry word will be valid until 3/13/11 at 11:59pm EST.  Any posts with the word made after that time will not count as a valid entry.

A review on Ocean Groves show (only their 2nd show EVER!) will be posted in the near future so definitely keep an eye out for that 🙂