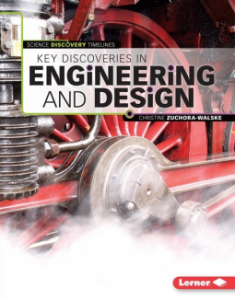 Key Discoveries in Engineering and Design is a children’s book to help introduce them to engineering. It focuses on various elements of engineering and design such as arches, print, steam, and evolution in inventions that led us to the computer.  The book is short, but focuses on a lot of the key elements and expresses them in such a way that it is easy for a child to understand and hopefully get excited and interested! There are also some great photos throughout the show what the book is talking about from counting machines, various buildings with arches, etc.  Great for any kid looking to find out some more about history, science and engineering.

Who were some of the earliest scientific engineers and what problems did they solve? What scientific discoveries led up to major breakthroughs such as the assembly line, computers, or the Internet? Who first proposed ideas to solve problems? And how did the solutions change over time? Readers will trace the history of key discoveries in engineering and design as they investigate timelines and gather key details from the text. In doing so, students will make connections between the work of various scientists and analyze the long-term effects of their discoveries.