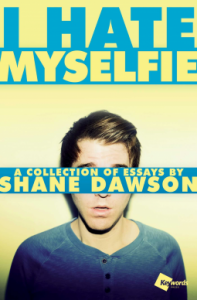 I Hate Myselfie is a series of essays written by YouTube star Shane Dawson. I had no idea who Shane was, but I thought the title was cute for a book so I figured I’d give it a read. He claims that his real life persona is not the same as his youtube/online persona – but since I had no idea who he was before reading the book I can’t say for sure or cite any examples.  One thing I really liked in the book was that before each chapter he had artwork done by his fans and a little write up about who did it which I thought was a nice touch and a fun way for his fans to be involved with his book!  Shane talks about how he lost 150lbs and a lot about his life and jobs he had before being a famous YouTuber, etc.  It was very well written and an easy read like having a conversation which I love with autobiographies.  I will have to check out some of his youtube videos now!

The book that more than 12 million YouTube subscribers have been waiting for! Shane Dawson’s memoir features twenty original essays—uncensored yet surprisingly sweet.

Shane Dawson has always been an open book. From his first YouTube vlog back in 2008, to his feature film debut “Not Cool,” to a cover story in Variety magazine, Shane has documented his life pre-tty thoroughly. We’ve seen awkward and adorable Q&As with his mom, weight loss center drama, love life details, and the all-important haircut reveal. We’ve seen his hilarious spoofs of Miley Cyrus, Paris Hilton, and Sarah Palin. His music videos are awesome.

But in I Hate Myselfie, fans will finally get a chance to see the real Shane through personal stories that are at once humorous and heartwarming, self-deprecating and totally inspiring. Highlighting key moments of his childhood and adolescence, through his phenomenal success on YouTube, and continuing on to his more recent experiences as an actor and director, Shane’s memoir will feature the silliness and satire his fans already enjoy, but it will be even more in depth, more real, and more portable (it’s a book).