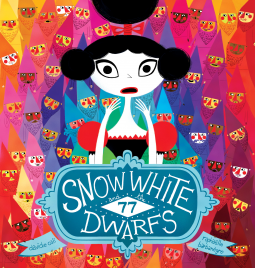 Snow White and the 77 Dwarfs is a hilarious take on the traditional Snow White and the 7 Dwarfs.  The dwarfs say that Snow White can live with them and hide out from the evil witch in return for doing the chores around the house.  Except that Snow can’t keep up with packing 77 lunches, making 77 dinners (with each of the dwarfs being picky about what specifics they want on their burgers!), read 77 bed time stories, etc. So when she comes across the evil witch and is offered an apple – she asks for TWO!

I love Snow White and found this book to be absolutely hilarious. The illustrations are wonderful as well and I had a lot of fun going through to see what all the 77 Dwarfs were named! How can you remember all those names?!

Snow White is on the run from an evil witch when she comes across some dwarfs in the forest. They agree to take her in and keep her safe if she will help them with their chores. She soon realizes she’s taking on a lot more than she bargained for. 77 breakfasts to make, 77 lunches to pack (don’t forget the juice boxes!), 77 pairs of pants to mend and a whole lot of dishes. Eventually Snow White decides to take her chances with the witch. There’s a surprise ending… well, it may not be so surprising. This is a hilarious retelling of the classic tale, with bright, energetic illustrations featuring busy dwarfs, and the even busier Snow White. 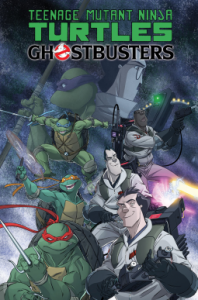 I don’t typically jump at the chance to review comic books – but when I saw this was a Teenage Mutant Ninja Turtles AND Ghostbusters crossover, I was interested and had to check it out.  At first, the turtles and the ghostbusters aren’t getting along – but with a huge Chi-You ghost on the loose – they have to get along to conquer him.

I found this book enjoyable, I liked the illustrations and the storyline was exciting as well.

When a new invention goes haywire, the Turtles are sent to a whole new type of New York City.

One with a whole lot more ghosts… and Ghostbusters!

The two teams will have to learn to get along quickly, because a new foe from the Turtles past has followed them and aims to conquer NYC!

Book Review: Another Little Piece Of My Heart

Another Little Piece of My Heart is about Richard Goldstein – a budding journalist growing up in the 1960s. He became the rock critic for The Village Voice – when such a thing didn’t exist. As someone who wishes I had a job like this – I found it to be quite fascinating read, especially with so much going on in the 60s with our country. He ended up living in Connecticut on the coast near Rhode Island in a commune with his wife, until it all fell apart. Then he eventually returned to the Village Voice.

Goldstein mentions that now there are a lot more women and that rock criticism has changed a great day since he helped to found it.

I also appreciated his note at the end where he mentions that the book is a “collection of recollections” and that while many of the characters in the book are dead, they may have children who did not know as much about their parents as he did so he might have altered names / appearances.

From the man who invented rock criticism, a star-studded, deeply felt account of the rise and fall of the sixties counterculture.

In 1966, at the ripe age of 22, Richard Goldstein approached The Village Voice with a novel idea. “I want to be a rock critic,” he said. “What’s that?” the editor replied.

It was a logical question, since rock criticism didn’t yet exist. In the weekly column he would produce for the Voice, Goldstein became the first person to write regularly in a major publication about the music that changed our lives. He believed deeply in the power of rock, and, long before it was acceptable, he championed the idea that this music was a serious art form. From his unique position in journalism, he saw the full arc of events that shaped culture and politics in the 1960s—and participated in them, too. He toured with Janis Joplin, spent a day at the Grateful Dead house in San Francisco, and dropped acid with Brian Wilson and the Beach Boys. He was present for Martin Luther King’s “I Have a Dream” speech, the student uprising at Columbia, and the riots at the 1968 Democratic Convention. He was challenged to a boxing match by Norman Mailer, and took Susan Sontag to her first disco. Goldstein developed close relationships with several rock legends––Janis Joplin and Jim Morrison, to name two––and their early deaths came as a wrenching shock, fueling his disillusionment as he watched the music he loved rapidly evolve from a communal rite to a vast industry—and the sense of hope for radical social upheaval fade away.

Another Little Piece of My Heart is the intimate memoir of the writer as a young man with profound ambition. It is also a sweeping personal account of a decade that no one else could provide—a deeply moving, unparalleled document of rock and revolution in America.

Richard Goldstein is a founder of rock criticism, starting at the Village Voice in 1966, and has written on culture, politics, and sexuality for the New York Times, Harper’s, the Nation, and elsewhere. He served as executive editor of the Village Voice and was named GLAAD columnist of the year for his gay activism. His books include The Poetry of Rock, Reporting the Counterculture, and Homocons: The Rise of the Gay Right. He teaches at Hunter College of the City University of New York. 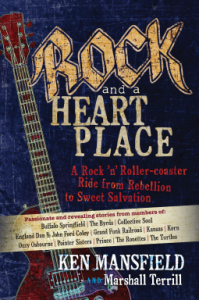 Rock and Heart Place is a Rock ‘n’ Roller-coaster Ride from Rebellion to Sweet Salvation containing passionate and revealing stories from members of Buffalo Springfield, The Byrds, Collective Soul, England Dan & John Ford Coley, Grand Funk Railroad, Kanas, Korn, Ozzy Osbourne, Pointer Sisters, Prince, The Ronettes and The Turtles.  (I’ve seen 2 of these in concert – can you guess which 2?)

The table of contents for this book is titled “Set List” which of course I thought was awesome.  There is an Overture and then 12 chapters followed by the Final Chord & Applause. The first chapter is about The Turtles – Flo & Eddie.  This is one of the two bands I’ve seen (though not on my artists seen list) at EPCOT when we went during Spring Break back in I think 1999. The second chapter is about Ruth Pointer from the Pointer Sisters – which is the other band I’ve seen live. Funny how it ended up being in that order.

The book focuses on entertainers who have found God and their spiritual journeys. Most of them are a bit of a Rock ‘n’ Roller coaster.

Fans laud their favorite performers with superlatives and adjectives usually reserved for deities and gods. In the cultural conscience, music stars have replaced preachers. Rock and a Heart Place traces the rise, fall, and redemption of famous entertainers who were brought to their knees—a great place to meet God.

Mansfield & Terrill interweave three themes in this book, Conversations with rock stars and musicians in their own words but with the authors’ clever and insightful narrative, Stories about the entertainment industry as seen through the eyes of entertainers, and Spiritual journeys about the venues, studios, and backroom deals that defined many musical careers and lives

Join award-winning producer and music executive Ken Mansfield and biographer Marshall Terrill on a spiritual journey down the secluded halls of the music industry.