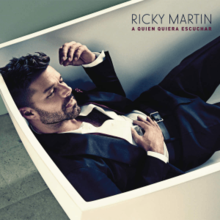 A Quien Quiera Escuchar (English: To Those Who Want to Listen) is the 10th studio album from Ricky Martin. It was released in early February 2015. The album is sung in all Spanish – which I know very little of but I still enjoy Ricky’s voice and the music is a lot of fun to dance to with some ballads as well.  I’ll be seeing Ricky live later in the year and am very much looking forward to it as he puts on a great show. (I’ll just have to learn some more Spanish before then!)