February 8, 2015 by ConcertKatie No Comments

Wednesday night I went to check out the Jersey Boys touring cast at the Oakdale Theater.  Drew Seeley is in the touring cast as Bob Gaudio so I wanted to check him out, but I was a bit hesitant because I had never seen a touring cast before and the tickets were almost as expensive as seeing it on Broadway (which is an hour and a half train ride away for me).  However, when tickets popped up on Groupon for about 50% off – I decided I’d go check the show out. 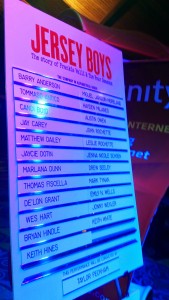 The show started at about 7:30 and I was surprised just how many latecomers there were – when it was time for them to be allowed to be released into the theater to find their place it was like a whole herd of people had been let go – which then led to lines in the aisles which was a bit distracting. (I think the fact that the ushers had no idea what the sections were contributed to that as well, as I came to the area I thought I was supposed to go to but was instructed to go to the other side of the theater – and then all the way back…)

Jersey Boys tells the story of Frankie Valli and the Four Seasons – from their early days being put together, their success and break up.  I tried not to read anything about the show before going and I also knew next to nothing about the group before going either so I found the show to be very informative and funny too.  There were a lot of songs in it that I knew but I didn’t know that they were done by Frankie Valli.

The show is recommended for ages 12 and up – The show contains smoke, gun shots, strobe lighting, drug references, sexual situations and authentic “profane Jersey language” and I definitely recommend that you check it out if it comes to a town near you! Find out where the show will be next at the website: http://www.jerseyboysinfo.com/tour/