Book Review: Inspired by the Beatles

February 13, 2015 by ConcertKatie No Comments 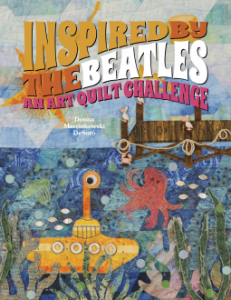 Inspired by the Beatles is an Art Quilt Challenge. The book is made up of quilts that were inspired by various Beatles songs. They are made by fans in honor of the 50th anniversary of the Beatles first trip to America, and there is also a story included with the image of their quilt with a bit of their story as a fan.  Some of these are very, very detailed – I was quite impressed! It also seemed like a lot of the quilts were made by fans in Virginia. I guess there are a lot of very crafty Beatles fans down there!  The book also includes a glossary with some quilting terms that may have been mentioned throughout the book and some info on quilting.  I’m not sure that quilting is something I can do, but I wish I could because this gave me a lot of fun ideas!

I received a free e-copy of  this book in order to write this review,  I was not otherwise compensated.

To commemorate the 50th Anniversary of The Beatles first visit to the United States, 150 artists chose a different Beatles song to portray as a 24″ x 24″ fiber art quilt. Inspired by the vast array of Beatles’ music and lyrics, they have merged talent with imagination to create beautiful works of art. Accompanied by 169 images, this book provides a personal narrative from each artist. Discover the stories behind their quilts and why certain songs were chosen. Read some of the personal memories the artists have of The Beatles, and hear many descriptions and details related to the making of these unique pieces. Behold the magic that happens when artists are challenged to use songs and fabric, lyrics and thread, and love for Beatles music combined with a passion for stitching. This book is a great resource for both art quilters and music lovers and a wonderful keepsake for the Beatles’ fan. 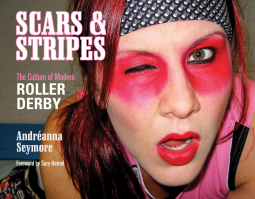 Scars and Stripes is a photography book about The Culture of Modern Roller Derby.  I’ve heard a bit about roller derby, but didn’t know too much about it. The author of this book joined roller derby and decided to document it.  It seems like it is a LOT of fun to participate in – but I’ll probably have to settle for just watching.  There were some photos of injuries in this book and I’m not sure I could handle all of the bruises! They also say that is “not IF you will be injured, but WHEN” – it is a tough sport! I was also surprised to see that there is even a junior roller derby!  Certainly an interesting book on a topic I probably otherwise would not have read up on.

Join photographer and skater Andréanna Seymore on her fearless journey through the world of roller derby, beginning with her serendipitous introduction to the sport in 2008. Modern roller derby is a vibrant, empowering, and revolutionary movement transitioning from obscure subculture to mainstream pastime on both a national, as well as global, stage. Action-packed and emotionally provocative photographs taken over a five-year period reveal the joy, pain, and dedication of these athletes on and off the track. Enriched by riveting and often touching commentary from nearly one hundred skaters, coaches, fans, and referees, this book captures the daring, entrepreneurial spirit of the participants, the extraordinary bonds that form, and the invigorating and infectious fanaticism that characterizes every bout. An increasing number of male, co-ed, and junior leagues all share a strong, do-it-yourself ethic that combines fierce athleticism with elements from punk, camp, and third-wave feminist aesthetics. In part because of this non-discriminatory nature, roller derby is currently the fastest growing sport in America. 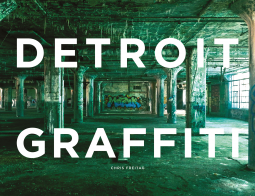 Detroit Graffiti is a book which features lots of photos of Detroit and their graffiti.  It mentions that the artists have a code – never paint on functioning businesses, never paint inhabited residences and never paint and occupied church.  With the decline in Detroit businesses due to the recession, there are plenty of spots around for them to paint.  There is a map in the beginning of the book which shows the areas of the city that are covered in each chapter of the book.  The graffiti can often camouflage blight and make a run down building look a lot more appealing.  The book did feature a lot of images of tags, but there were some large murals that were absolutely amazing.  One in particular was a mural with the Avengers that is in downtown Detroit.  A very interesting read.

In the past three or four years, Detroit has become a “spraycation” spot for graffiti artists. Formerly known as the automotive capital of the world, the media now refers to the Motor City as a bankrupt ruin—a shadow of its former self. Thanks to the city’s street artists, however, Detroit is experiencing an artistic renaissance. The author has recorded the work produced by these graffiti writers and documented the evolution of Detroit street art culture in more than a dozen neighborhoods in and around this resilient Midwest city between 2008 and 2013. This photographic dossier is the first book to exclusively feature graffiti from Detroit, where one in every five structures is vacant, abandoned, or dilapidated. As industry disappears, the number of vacant walls increases, drawing the attention of the most talented graffiti artists and writers on the planet.

Book Review: The Best Kept Boy In The World 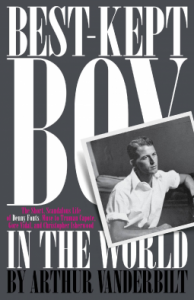 The Best Kept Boy In The World is about Denny Fouts who is the most famous male prostitute.  Denny could command any room he had walked into and would then receive invitations to bars, dinners, Broadway shows, etc. As a teen who had no higher education and no family connections, he loved being the center of attention and being friends with artists, musicians, producers, executives, etc.

Denny led a truly fascinating life, and all of it is chronicled in The Best Kept Boy in the World.  A fun read and a bit different than what I usually read.  Certainly recommended.

“Denny, long before he surfaced in my cove, was a legend well-known to me, a myth entitled: Best-Kept Boy in the World.”—Truman Capote

Denham (Denny) Fouts, the twentieth century’s most famous male prostitute, was a socialite and literary muse whose extraordinary life started off humbly in Jacksonville, Florida. But in short order he befriended (and bedded) the rich and celebrated and in the process conquered the world.

No less an august figure than the young Gore Vidal was enchanted by Denny’s special charms. He twice modeled characters on Denny in his fiction, saying it was a pity that Denny never wrote a memoir. To Vidal he was “un homme fatal.” Truman Capote, who devoted a third of Answered Prayers to Denny’s life story, found that “to watch him walk into a room was an experience. He was beyond being good-looking; he was the single most charming-looking person I’ve ever seen.” Writer Christopher Isherwood was more to the point: he called Denny “the most expensive male prostitute in the world.”

In his short life, Denny achieved a mythic status, and Best-Kept Boy in the World for the first time follows him into his rarefied world of barons and shipping tycoons, lords, princes, heirs of great fortunes, artists, and authors. Here is the story of an American original, a story with an amazing cast of unforgettable characters and extraordinary settings, the book Gore Vidal wished Denny had written.

Arthur Vanderbilt is the author of many books of history, biography, memoirs, and essays. He lives in New Jersey and Massachusetts.