Book Review: The Pandas and their Chopsticks

February 6, 2015 by ConcertKatie No Comments 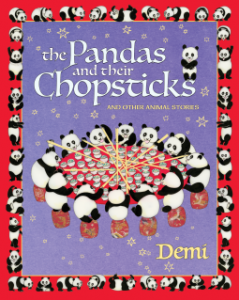 The Pandas and their Chopsticks, is the first story in this book and it continues with other animal stories.  The Pandas have 3 foot long chopsticks and they are not sure how to use them to feed themselves, but realize it is a lot easier to use them to feed each other across the table.  Each story is a “wisdom tale” which has a lesson on life. The other stories in the book include:

A great Children’s book with some great learning opportunities inside and some favorite animals featured in the stories.

I received a free e-copy of this book in order to  write this review, I was not otherwise compensated.

Eating bamboo shoots with chopsticks three feet long? Impossible, you say. Not if you are a playful panda and learn to share and work together with your friends! In her newest work, award-winning author, Demi, presents 10 classic animal stories, each containing important moral lessons for little hearts and minds to absorb. Cunning kitties, helpful hummingbirds, talkative turtles, and hasty hedgehogs, all bring these beautiful fables to life. Through her magical illustrations and whimsical storytelling, Demi teaches the importance of being humble, the dangers of being too proud, the importance of generosity and sharing, and how everyone, no matter how small, has a part to play in life. 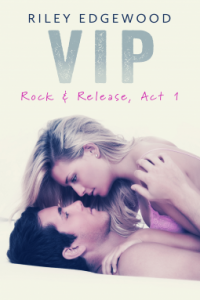 VIP is the first part of a serial in the Rock & Release series. The book starts with Cassidy and her friend Teagan at a VIP area before a concert begins.  Somehow the two get in a fight and Teagan storms off – with both of their concert tickets in her purse.  It is with that fight that Cassidy’s summer plans completely change.  She was supposed to be starting a summer internship at a Fortune 500 company – a gig that her Dad got for her.  Except somehow staying in the VIP area for the concert she gets drunk, gets offered a job at the bar and ends up going home with the guitarist who plays on the patio.

When she returns home the next morning, she decides maybe she should take the job at the venue and skip out on the internship.  Her father tells her that if she doesn’t take the internship she can no longer live in his home – so she leaves and ends up rooming with one of the waitresses she met the night before.  And she ends up with Gage, the sexy guitarist, every night.

Usually these serials make me angry because they spend too much time setting up the story and then they end before things get good.  Not so with this book! Things are “good” from just about the beginning of the book and I am now looking forward to checking out the rest of the Acts – Starstruck and Showstopper to see how Cassidy’s story ends.

When Cassidy Evans scores VIP tickets to a concert, she decides to use them for one carefree night before beginning a summer internship at her father’s Fortune 500 company. But one carefree night turns into a few too many martinis—with two unexpected twists: A steamy encounter with Gage Logan, sexy singer and guitarist, and a tempting job offer from Gage’s boss to work at the concert venue she now knows quite intimately.

She definitely can’t take the job. Her internship is an opportunity any business major would kill for. But the thought of working with her father, a man furious with grief over a family tragedy that struck six months ago, fills her with dread.

Then there’s Gage. Working with him all summer could be hot. Cassidy can’t stop flashing back to their night together. Molten kisses. His hands smoothing across the skin of her belly. The weight of his body above her own…

And suddenly the decision about how to spend her summer is much, much harder to make.

VIP is the first act of the three part sexy romance serial, Rock & Release. The final two acts, Starstruck andShow Stopper, will release on December 1 and December 15, respectively, at all major e-book retailers.

New Adult romance suitable for 17+ due to mature content.

Book Review: The Many Faces of Josephine Baker 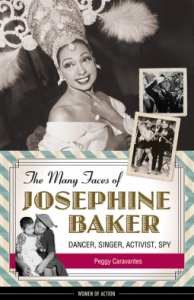 At first, this looked like your typical entertainment biography – Josephine Baker is a Dancer, Singer, Activist – and wait, what? a SPY?  So of course I had to read this book to find out more about Josephine!  The book starts with a note from the author saying that it is hard to track down Josephine’s life story. Mainly because of Josephine herself – who destroyed all pieces of her life from before she was 19 years old – which is when she left the United States for France.  As an adult, when she talked about her early life, she embellished things a bit.

Josephine wanted to be a star and she started at 13-years-old boarding a train for Memphis – and never turned back. As a child she risked having her leg amputated after stepping on a rusty nail. She begged the doctor to not cut it off – not wanting to think about being unable to walk or dance again and the doctor was able to save her leg. At 7, her mother told her she needed to find a job to support the family.

The book continues to chronicle the different performances that Josephine was in.  Of course, I just want to know about this spy business.  Oh, also interesting? She rescued a monkey from a pet store in Rio De Janiero!

During WWII is when Josephine did her work as a spy. I don’t want to give too much away (because you’re supposed to want to read the books I post about, of course) but it was very interesting how they delivered the secret information!   Josephine certainly led a fascinating life and it’s all here in this book – and since it is a children’s book it is a pretty quick read!

With determination and audacity, Josephine Baker turned her comic and musical abilities into becoming a worldwide icon of the Jazz Age. The Many Faces of Josephine Baker: Dancer, Singer, Activist, Spy provides the first in-depth portrait of this remarkable woman for young adults. Author Peggy Caravantes follows Baker’s life from her childhood in the depths of poverty to her comedic rise in vaudeville and fame in Europe. This lively biography covers her outspoken participation in the U.S. Civil Rights Movement, espionage work for the French Resistance during World War II, and adoption of 12 children—her “rainbow tribe.” Also included are informative sidebars on relevant topics such as the 1917 East St. Louis riot, Pullman railway porters, the Charleston, and more. The lush photographs, appendix updating readers on the lives of the rainbow tribe, source notes, and bibliography make this is a must-have resource for any student, Baker fan, or history buff. 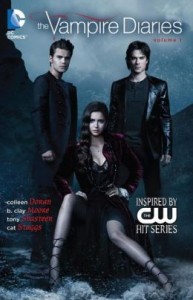 The Vampire Diaries is the first volume of the TV series as a comic book.  It is the same characters that you know and love (or maybe don’t love) from the TV show. The book has multiple stories in it, most of which taking place of course in Mystic Falls and other familiar locals.  This book was almost 400 pages!  I really enjoyed these stories, I don’t really watch the show anymore but I may have to go back and get caught up because this book got me back into everything again!  The comic book is released through DC Comics and inspired by the hit series.  There are great illustrations and the characters look just like their TV actor counterparts!

Elena, Stefan and Damon make their comics debut in a new series based on the hit CW television show! This anthology graphic novel will bring some of comics’ greatest talents to Mystic Falls and set them loose to bring the characters to life. Or death. They are vampires, you know.

THE VAMPIRE DIARIES is a must-read for any fan of this runaway hit TV series. Collects digital chapters #1-39.