February 3, 2015 by ConcertKatie No Comments 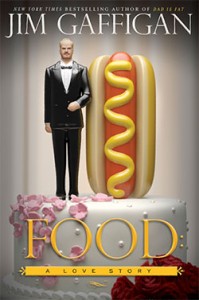 Food: A Love Story is the follow up to Jim Gaffigan’s book “Dad Is Fat”.  In Food, we get a chance to find out just what it is that made Dad fat.  This book is of course full of humor with chapters dedicated to seafood, cheese, donuts, bagels and everything in between. (And don’t forget Bacon.)

As I read the book I couldn’t help but laugh and agree with a lot that he said.  If you are a fan of Jim and a fan of food, you’ll not want to miss out on this book.

It is just over 350 pages, but the chapters are short enough that you keep saying “yeah let me read one more” and then next thing you know you’re finished with the book and a whole pint of ice cream.

I received a free copy of this book from the Blogging For Books program in order to write this review. I was not otherwise compensated.

“What are my qualifications to write this book? None really. So why should you read it? Here’s why: I’m a little fat. If a thin guy were to write about a love of food and eating I’d highly recommend that you do not read his book.”

Bacon. McDonalds. Cinnabon. Hot Pockets. Kale. Stand-up comedian and author Jim Gaffigan has made his career rhapsodizing over the most treasured dishes of the American diet (“choking on bacon is like getting murdered by your lover”) and decrying the worst offenders (“kale is the early morning of foods”). Fans flocked to his New York Times bestselling book Dad is Fat to hear him riff on fatherhood but now, in his second book, he will give them what they really crave—hundreds of pages of his thoughts on all things culinary(ish). Insights such as: why he believes coconut water was invented to get people to stop drinking coconut water, why pretzel bread is #3 on his most important inventions of humankind (behind the wheel and the computer), and the answer to the age-old question “which animal is more delicious: the pig, the cow, or the bacon cheeseburger?” 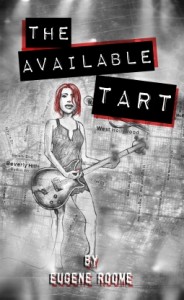 The Available Tart begins with  Anastasia needing to get home from a gig in London back to the US because one of her Tart sisters is in the hospital.  Her manager doesn’t want her to get home so he has all her money and passport – but somehow she makes it home.

Things fast foward a bit and the Tinseltown Tarts are on tour.  Pete is following them to several midwestern shows – he gets vetted to make sure he’s not crazy and then gets invited backstage by the band so he can meet Ann – The Available Tart.

The two seem to hit it off and the other girls “circle” him – which is a series of tests to make sure that he is serious about his relationship with Ann.

The book was a fun look at the behind the scenes of this tour with these 4 females in a rock n roll band and a budding romance with a guy who is divorced and doesn’t want his heart broken again.

The book sets up for the sequel which should be available soon.

I enjoyed reading this book – it seemed to be pretty accurate of what I know of the touring life and was a fun read.

I received a free e-copy of this book in order to write this review.  I was not otherwise compensated.
About the Book

The Tinseltown Tarts are a middle-aged, four member, once wildly popular all-female rock ‘n’ roll band from California. Facing a midlife crisis, Pete follows them on their Midwestern tour. He’s keeping his distance, but he’s on one of the member’s radar…and she’s actually available. The book’s a fast-paced, humorous, sometimes serious male-perspective “romance” novel with a trashy title and many layers.

Musicians seem to love this book, probably because it accurately depicts their world and delineates the earthquake-like changes which have forever altered it. The Available Tart describes the beauty of the Midwest, lovemaking during a thunderstorm, includes a visit to the Minnesota State Fair and a trout stream valley, briefly touches on the sights of Minneapolis/St. Paul, and even features a goat. The subject matter includes (tasteful) adult situations (after all, Pete is chasing a rock ‘n’ roll goddess).