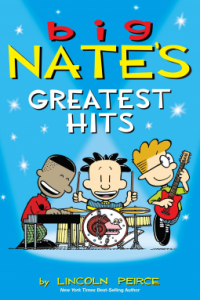 Big Nate’s Greatest hits is a compilation of some of the best comic strips staring none other than big Nate!  The book is made up of 3 e-book collections: Big Nate Makes a Splash, Big Nate Dibs on This Chair and Big Nate pray for a Fire Drill.  Big Nate is an 11 year old boy – and I think he could give me a run for my money in Monopoly – he is the self proclaimed king and has beaten his friends 100 times in a row! (Monopoly is my favorite game but I can’t ever find anyone to play with me!)

These comic strips are a varied of black and white and colored and on a variety of topics that pass through the brain and life of an 11 year old that runs the gossip chatter column at school.  Lots of laughs and a lot of fun to read.

The more Big Nate, the better! Readers will have their fill of Nate’s wisecracks and school day shenanigans in this giant collection of hilarious comic strips.

Eleven-year-old Nate Wright is no one-hit wonder. He’s the king of Monopoly, the Michelangelo of P.S. 38, and a Cheez Doodle poet extraordinaire. He’s a sixth-grade superstar—at least, that’s what he tells everyone—and he’s going all the way to Number One. Whether he’s having an imaginary near-death experience, creating another hilarious episode of “Doctor Cesspool,” or meeting the girl of his dreams at summer school, Nate’s always at the top of the charts. The hits just keep on coming in Big Nate’s Greatest Hits!