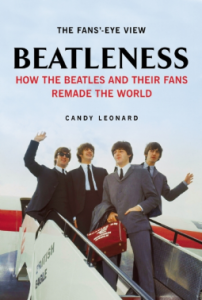 Beatleness looks at the effect the Beatles and their fans had.  I always like books that look at things from a more fan perspective because I find a lot of it is similar – different eras but fan girls and their boybands always have the same kind of effect and reactions no matter the year.

One part I found amusing in a “same shit, different band” kind of way was the section on “Picking a Fave” – “But as kids, it was important – especially for girls and young boys – to pick a favorite, even if your choice was arbitrary, constantly changing, or really your second choice because your best friend claimed your true favorite first.”  (I think the only time I’ve ever actually stuck with my first favorite was with Hanson – or I’d pick 2+ to begin with and then narrow it down to one as I saw more appearances or met them.)

Of all the books I have read about the Beatles, I liked this one a lot more than most – maybe even the best – because I like how it had little snippets of quotes from fans and their memories from the time – why they scream at concerts, getting to stay up late and watch a Beatles movie at the drive in, etc. Rather than just an overview of how the fans felt, it made things feel more personal.

The Beatles arrived in the United States on February 7, 1964, and immediately became a constant, compelling presence in fans’ lives. For the next six years, the band presented a nonstop deluge of sounds, words, images, and ideas, transforming the childhood and adolescence of millions of baby boomers.

Beatleness explains how the band became a source of emotional, intellectual, aesthetic, and spiritual nurturance in fans’ lives, creating a relationship that was historically unique. Looking at that relationship against the backdrop of the sexual revolution, the Vietnam War, political assassinations, and other events of those tumultuous years, the book examines critically the often-heard assertion that the Beatles changed everything” and shows howthrough the interplay between the group, the fans, and the culturethat change came about.

A generational memoir and cultural history based on hundreds of hours of in-depth interviews with first-generation fans, Beatleness allows readers to experienceor re-experiencewhat it was like to be a young person during those eventful and transformative years. Its fresh approach offers many new insights into the entire Beatle phenomenon and explains why the group still means so much to so many.