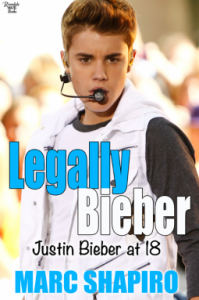 Legally Bieber: Justin Bieber at 18 is a biography about Justin – but rather than focus on his entire life (the author has already written one biography on the superstar) it focuses on his 18th year.  Bieber is now officially an adult (and at the time of writing this is now 19) and is now in control of his money that was previously put aside for him until he turned of age. He is no longer required to tell his mother where he is going and she no longer gives him an allowance from his earnings.  How will the year go?  Each chapter is split up into 1 month of his 18th year and what he did in that time.

Seeing his schedule month by month makes you realize just how much and how strenuous it is. The kid is all over the world, quite literally, and is jam packed with all sorts of appearances.  An interesting read, but most of the info can be found in the media if you follow his career or the trending topics at all.

Justin Bieber is 18. He can legally drink, drive and be  whatever he wants to be. Justin Bieber is legally an adult. But the question  remains… Is the teen sensation up to being a man?
Legally  Bieber…Justin Bieber At 18: An Unauthorized Look at His First Year As an  Adult follows the multi-platinum singer from his 18th birthday, through a new  album and a monster tour. We are at his back as he acts and reacts to personal  and professional challenges. In this month-by-month odyssey, we see the young  singer just this side of manhood; acting the seasoned professional, acting the  fool and, at the end of the day, acting decidedly human and not quite grown up.  It is a year full of high drama with lessons learned, often the hard way, and  the kind of education that can only be learned at the feet of pop culture and  stardom.
Legally Bieber: Justin Bieber At 18: An Unauthorized Look at  His First Year As an Adult is his truth laid bare. Can he handle it? Can  you?