June 6, 2013 by ConcertKatie No Comments 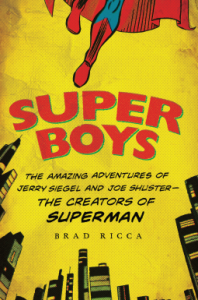 One time, I saw on The OC a book called Kavalier and Clay.  So I bought it.  And have yet to read it.  So when I saw that this book is the biography of the inspiration for Kavalier and Clay, I decided to check it out.  The book is pretty long, 425 pages.  I was a bit overwhelmed and put off reading it for a long, long time.  But I love Superman and finding out more about the creators would be something interesting to me, no matter how long it would take me to read it.  (The book is split into 3 parts and before all the notes is about 100 pages less than it appears to be.)

The story actually ended up being quite interesting and although the book was long, it flowed and was easy to read, unlike some other biographies I have checked out.  It was interesting to see the evolution of the stories and Superman as well as find out about the inspiration for Lois Lane.

Also great was how the two just kept trying to get their comic seen.  They never really seemed to take no for an answer.  And obviously, eventually this paid off for them, and quite handsomely.

Overall, definitely an inspiring and interesting biography and maybe I’ll have to find Kavalier and Clay now and give it another try…

The first comprehensive literary biography of Joe Shuster and Jerry Siegel, creators of Superman and the inspiration for Michael Chabon’s Kavalier and Clay

Drawing on ten years of research in the trenches of Cleveland libraries, boarded-up high schools, and secret, private collections, Brad Ricca’s Super Boys is the first ever full biography about Superman’s creators. Among scores of new discoveries, the book reveals the first stories and pictures ever published by the two, where the first Superman story really came from, the real inspiration for Lois Lane, the template for Superman’s costume, and much, much more. Super Boys also tracks the boys’ unknown, often mysterious lives after they left Superman, including Siegel’s secret work during World War II and never-before-seen work from Shuster.

Super Boys explains, finally, what exactly happened with the infamous check for $130 that pulled Superman away from his creators—and gave control of the character to the publisher. Ricca also uncovers the true nature of Jerry’s father’s death, a crime that has always remained a mystery. Super Boys is the story of a long friendship between boys who grew to be men and the standard that would be impossible for both of them to live up to.