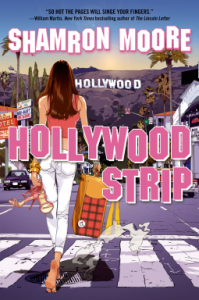 Hollywood Strip is about a girl named Callie who leaves her job as a dental assistant in Michigan to pursue her dreams of being an actress in Los Angeles.  In order to make ends meet she is a waitress because that is the only job you can get at night when going to auditions in the day.  She is rejected to be a model for a major magazine, but somehow gets a call back on a horror movie.  Playing lead opposite her is Gabby, another actress/model who she had befriended on a different gig that sent her to Vegas.

Gabby and Callie make the movie a huge hit – and even land the cover of the magazine that had previously rejected Callie!  Things are going great – she is even dating a musician who now has a top 10 hit. And then everything seems to come tumbling down.

Then tragedy strikes and she finds herself on her own filming a TV show sequel to Nympho Cheerleaders Attack – which is going great but is not the direction she really wanted her career to go in.  A movie sequel is on the table but in order to be in it – she’s going to have to post nude in the magazine again – something she definitely wants nothing to do with.

Will she stick to her guns and do what she wants to do for her? Or will the allure of Hollywood money tempt her into doing things she had wanted to move on from?

This book was a bit long and I wasn’t entirely happy with how it ended – not really with what happened – but it just kind of ended and didn’t wrap up some things I was hoping it would.  Otherwise, it was an enjoyable and silly look into Hollywood and all that goes on behind the scenes – being tempted with money, drugs, love, etc.  Probably a book more for an older teen, due to some of the subject matter.

I received a free e-copy of the book through NetGalley in order to write this review, I was not otherwise compensated.


Callie knows exactly what she wants:  fame, fortune, and a fabulous career as a Hollywood actress.

Packing her bags, Callie leaves her mundane life in Michigan for Los Angeles, determined to be a star.  Her schedule is grueling: waitressing long hours to make ends meet and auditioning for anything and everything in the hopes that she’ll land a big break.  After suffering what feels like thousands of heartbreaking rejections, she finally lands the lead in an unlikely hit movie,Nympho Cheerleaders Attack!, bringing her dry spell to an end.

The  film opens a new world of glamorous possibilities.  Coupled with a budding romance with Evan Marquardt, a sexy, chart-topping singer, Callie’s on top of the world.  But she’s  thrown for a loop when tragedy strikes, unleashing a string of events  she never in her wildest dreams anticipated.  She quickly discovers that success in Hollywood creates a feeding frenzy of money-hungry producers, two-faced friends, and privacy-robbing paparazzi.  It seems that life as an on-the-rise starlet is not as glamorous as she once imagined. . .

Dishing the dirt on the secret world of Hollywood’s nasty side, Hollywood Strip is a heartfelt story about ambition, empowerment, and what it means to make it in the City of Angels.