Book Review: Piece of My Heart 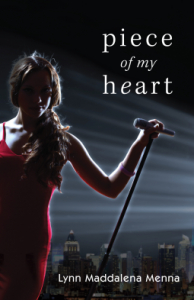 Piece of My Heart is the story of Marisol who gets the chance to fulfill her dreams of being a singer while still in High School.  It takes place in New York – more specifically – East Harlem.  This makes life tough for Marisol, but she is convinced that she will make it in the business and become a real singer.

The story also shows Marisol’s relationship with her friends and how that changes as Marisol’s career starts to take off. This was an interesting side story and makes sense as I think this is something that up and coming “stars” tend to struggle with.  She also has a relationship with Lola, who is her stepmother.  Her father has passed away and her mother has not been in the picture since Marisol was a baby. Lola could easily have been written as an evil stepmother character, but instead she has a great relationship with Marisol even though they aren’t blood related. I really liked this aspect of the story.

When a hot singer asks her out twice in a row, she is ecstatic, but he just doesn’t seem to be into her. Is it something she did? All at the same time she finds out that the boy she loves seems to be dating another one of her friends. How could her world turn so upside down in just a couple of days?

This was a great book and a great story and obviously I loved that it revolved around music. (And the title of each chapter is a song title! I think so anyway, some I didn’t recognize)

Still in high school, Marisol Reyes gets the chance of a lifetime to be a real singer, and she leaps at it. After all, this is the dream she held on to, all the days and nights she spent growing up on means streets of East Harlem. Marisol never gave in–no matter what her boyfriend or her best friend had to say. Who cares if only one in a hundred pretty, talented girls make it? She will be the one. In her rush to fame, Marisol tramples on the heart of her loyal best friend, and Julian, the boy she loves. But will it be worth it?

One night at a private gig in the Hamptons, the little Latino girl with the big voice from East Harlem gets a severe reality check. A famous rapper who claims to be interested in her talents turns out to be interested in something else, threatening not only Marisol’s dreams but her body and soul. Will the realities of the gritty New York music scene put out the stars in Marisol’s eyes forever?

Lynn Maddalena Mena, a former teacher, saw the beauty, talent, and radiant hopes of so many students like her character Marisol, and was inspired by wondering where those hopes would go in ten years. A magazine journalist and essayist, she lives in New Jersey with her husband, Prospero. Piece of My Heart is her first novel.