June 5, 2013 by ConcertKatie No Comments 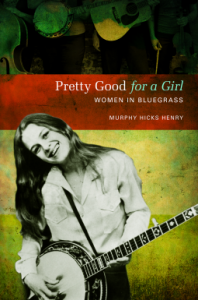 I don’t often hear much about women in bluegrass. I’m not sure if this is just because I am not a huge fan of bluegrass or if they really just aren’t talked about all that much.  Pretty Good for a Girl, chronicles the women in Bluegrass and it is separated into chapters by years.  There are 4 ladies represents from the 1940s, 6 ladies / groups represented in the 1950s, In the 1960s we have 13 groups and/or ladies, in the 1970s the floodgates opened giving way to 13 more additions.  The 80s had 4, and in 1990 there are too many to count but there are chapters devoted to 4.

Featured in the book are Wilma Lee Cooper, Bessie Lee Mauldin, Betty Amos with Jud and Jen, The Women in California, Alison Krauss, The Dixie Chicks and many, many more.

The title of the book comes from the backhanded compliments many get – you’re pretty good! … for a girl.   Being told you do anything “like a girl” has always been considered a put-down.

The first book devoted entirely to women in bluegrass, Pretty Good for a Girl documents the lives of more than seventy women whose vibrant contributions to the development of bluegrass have been, for the most part, overlooked. Accessibly written and organized by decade, the book begins with Sally Ann Forrester, who played accordion and sang with Bill Monroe’s Blue Grass Boys from 1943 to 1946, and continues into the present with artists such as Alison Krauss, Rhonda Vincent, and the Dixie Chicks. Drawing from extensive interviews, well-known banjoist Murphy Hicks Henry gives voice to women performers and innovators throughout bluegrass’s history, including such pioneers as Bessie Lee Mauldin, Wilma Lee Cooper, and Roni and Donna Stoneman; family bands including the Lewises, Whites, and McLains; and later pathbreaking performers such as the Buffalo Gals and other all-girl bands, Laurie Lewis, Lynn Morris, Missy Raines, and many others.

Murphy Hicks Henry is a professional banjo player, teacher, and writer living in Virginia. She founded the Women in Bluegrassnewsletter and has written regularly for Bluegrass Unlimited andBanjo Newsletter. She is also the co-creator of The Murphy Method, a series of instructional videos on playing the banjo and other bluegrass instruments.