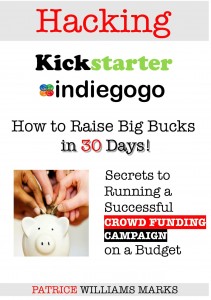 Crowd-Funding is a really awesome new trend and a new spin on social media.  Using various websites (Kickstarter probably being the most popular) those who have great ideas but not the money to fund these ideas can pitch their ideas to the public in hopes that they will donate money to help fund them.

I have been involved in several of these type of projects – as a donor.  Some of these projects have gotten funded and some have not.  Some have gone above and beyond what they were looking to raise (Veronica Mars movie, anyone?) and others have made just about their initial request in funding.

Hacking Kickstater is a book by Patrice Williams Marks that anyone considering starting a crowd funding project must check out.  Kickstarter says that about 44% of their projects get funded – except the numbers are a bit skewed and these focus on only dance related projects.  Other categories are much less.

The book is rather short, but full of really great insight and information that anyone considering starting a kickstarter (or other similar site) should definitely read and use to their advantage before making their projects live.

If you have already launched a project and it failed – this book will also help you figure out what to do in order to try it again and this time get it to succeed.

One of my favorite bands, Honor Society, has done 2 successful kickstarter campaigns in the last few years.  One funded their independent EP “Serendipity” – I think that this is a great tool for independent bands because they can get support from their fans that would be similar to getting support from a major record label – without having to conform to label standards and still have the ability to do things their way.  If you’re an indie band – certainly check out this book before you consider launching anything!

So you have this great idea for a book, video game, water hovercraft, app, newfangled watch, dance project, but you don’t have the money to produce it. You’ve heard about this new thing called “crowd-funding,” and believe this will be your ticket. Simply post a project to any number of sites and the money will begin to roll in, right? Wrong.

Unfortunately, according to a Kickstarter representative, “Only 44% of projects get funded.” 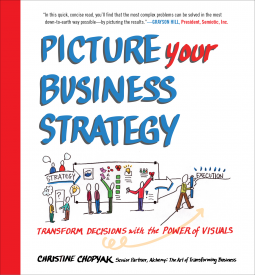 Picture your Business Strategy will help you bring the illustrations back to your ideas.  I actually still sketch out all my ideas on paper before going about trying to figure them out – but this seems to be a dying practice.  This book is all about how you can bring them back and make them work for you and your business.  I think that I am a more visual and hands on learner and this is why I like to see something instead of just hear you tell me about it or have me read about it.  The power of visuals!

The book has a lot of great information in it, and of course since it is about pictures and visuals there are great little sketches (just  about a level above stick figures) throughout the book for an added touch, as well as some sketched graphs and diagrams as well.

If you have a business or are thinking of starting one, this is definitely a great book to read to give you some ideas on how to make things work.

Strategic Illustration—the proven method for helping team members engage, align, and devise creative solutions to business problems—is now at your fingertips. The adage, “A picture is worth a thousand words” could not hold truer for Chis Chopyak, senior partner and co-owner of Alchemy, is a business strategy consulting firm that makes a profound and sustainable difference in the world. As a graphic recorder, she understand the impact of employing strategic illustration in your organization to really see clearly what is working and what is not: it opens up the lines  of communication so you and your team can have candid conversations about next steps and best practices.

Picture Your Business Strategy reveals how anyone can use visual tools to illuminate root causes of problems and devise strategies to solve them. Creating visual images of problems helps people focus, fosters collaboration, increases group energy, and drives creativity. The book provides practical lessons on strategic illustration you can use to drive positive results on a consistent basis. You don’t have to be an artist to “draw” your strategy. All you need is a vision and Picture Your Business Strategy.