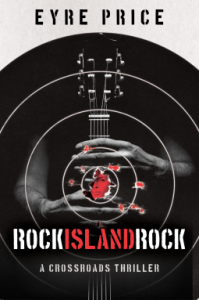 Rock Island Rock is the second book in a series and I did not read the first one.  I am not sure that I actually missed anything by not reading the first one though as it seemed like everything was well explained and it didn’t seem to have any gaps that I was confused about. (I’m assuming it was the same characters in a totally different story.)

A rock n roll superstar has been killed and Daniel, Vicki and Moog are on the case!

The book takes place in New York – Queens – and any book that mentions Shea Stadium in the first couple of paragraphs is guaranteed to have my attention for a while.  The book moves fast – there are a lot of chapters but they’re only a couple of pages each and I quickly found myself very deep in the book and very interested in the story.  However, about halfway through I lost my interest. A lot of new characters were introduced and it made things a bit harder to follow.  Even the music aspect of the book wasn’t enough to keep my attention once it got to this point.  I did stick it out though because I was interested to see how it would end and if I’d be ok with the ending or not. (It was ok, but nothing spectacular)

Ultimately I think that the book was a good idea, but a bit poorly executed.  From what I read of reviews of the first book, it seems like I may enjoy that one more, but I’m not sure I’ll have the time to give it a chance. If you like action and drama and mystery and don’t mind a bunch of additional characters being thrown at you, I think you will enjoy it.

Also interesting and worth noting at the end of the book there are lyrics to songs that Taco Shot released as Greatest Hits.

ROCK ISLAND ROCK is the pulse-pounding second act in the the evolution of the Crossroads series, which began with Blues Highway Blues, voted Best Blues Book of 2012 by Blues411.com.

Owing a debt to the mysterious bluesman, Mr. Atibon, reluctant hero Daniel Erickson finds himself back on the run with his lady love, Vicki Bean, and hitman friend, Moog Turner. Now the three are racing to track down the killer of a rock and roll superstar. They travel a violent and dangerous road, littered with obsessive FBI agents, vengeful Russian mobsters, brutal cartel assassins, and psychotic biker gangs. But no matter how fast and far Daniel and company run, there’s no escaping the blood they’ve spilled—and an unspeakable evil waiting for them.