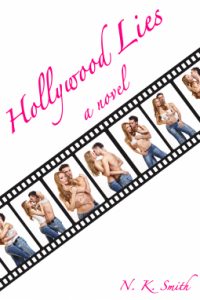 Hollywood Lies is a novel with split perspectives – chapters alternate between Devon Maddox – and up and coming actor and Collette Stroud, a hollywood star and child prodigy.  Their two lives meet when Devon auditions for a roll in a movie that Cole is directing.

At first, Devon starts a relationship of sorts with Cole’s assistant, but when he moves on to Cole, the assistant is not happy.  She gets fired – but will she spill all and ruin Cole’s plans to have a hidden relationship and keep her private life private?

Devon, against Cole’s wishes, signs a contract for a couple more movies in the series with his costar Lili.  Neither of them read the contracts and see that as part of the promotion, Lili and Devon are supposed to be having a secret relationship to help promote the movies. But will their relationship turn in to something more?

Something the blurb for this book does not mention is that it is pretty much all sex all the time between everyone in the book. If you’re in to that sort of thing – you’ll love it.  I don’t mind it, but I did find it to be overwhelming at times and had to put the book down. If that sort of thing makes you uncomfortable, it might not be the book for you.

Underneath all the relationships, there is a fun story about Hollywood and how the business works (at least in this world.)  Who will Devon end up with? Will his fake relationship with Lili become real? Will Cole ever decide to come out in public as being with Devon or will his spending time with Lili throw a wrench in the works? Will Cole’s ex-assistant tell all and ruin both their careers?

In a world where make believe is a multibillion dollar industry, it’s hard to know where the fantasy ends and real life begins. When Collette Stroud, an influential Hollywood actor and director, takes a chance on two young actors for her romantic teen movie, three lives converge in a complicated web of publicity, passion, lust, and lies.

The web is cast when Stroud, a woman with a few skeletons in her closet, hires two young artists in her low-budget film. She handpicks Liliana Addison and Devon Maddox to be Hollywood’s next big stars. Former child star Liliana has had limited success with her previous roles but hopes to take the world by storm under Collette’s tutelage. While Devon is an out of work actor, he never stops dreaming about making it big. The director’s interest in him assures Devon his dreams are about to become reality.

Sparks between Collette and Devon set their lives ablaze, but the studio has other plans. Executives concoct a fictitious romance in order to drive box office sales and launch careers between Devon and Liliana. When the studio offers to make the young actors into bona fide stars, will the price be too high to pay, or will the deal be too sweet to pass up?

Can the trio handle the pressure of a hidden romance coupled with a phony public relationship? Will love be enough to conquer the promise of fame, fortune, and a lasting legacy, or will it be an easy sacrifice?

All three will tread the thin line of Hollywood Lies and genuine passion on the most important red carpet walk of their lives.