Unfortunately it looks like I will not be attending a show on the One Direction tour this summer (and not for lack of trying!) but I have some friends attending and it looks like this was the setlist for opening night last night and I would imagine it would remain about the same for the rest of the tour.  (And I hate to beg, but please someone hook me up with tickets to an east coast date?! MA.. NY… please?)

Live While We’re Young
What Makes You Beautiful 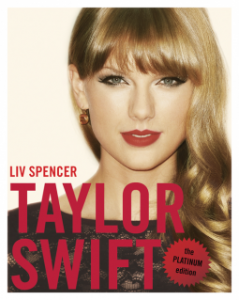 It’s no secret I am not a fan of Taylor Swift.  But I can’t resist reviewing books about music and musicians so I figured, why not?  Most of Taylor’s story I already knew – and considering I am not a fan I guess that just goes to show you how often it is mentioned. (She was bullied, moved to TN, all her songs are about boys, you know it too.)

However, one of the interesting parts in this book is the chapters titled “Swift Notes” which goes through the songs on her albums and tells you how / where / why she wrote the songs, who they are about and some stories from recording them.  While I am not familiar with most of the songs mentioned, this is by far the best part of the book and the part that kept me interested.  It’s kind of interesting to get in to Taylor’s head a bit on each of the songs.  The fact that she wrote 1 song in 15 minutes in math class is pretty amazing – anyone who can write songs is fascinating to me because I have tried and I can not.  And while I don’t like Taylor I can’t deny that for the most part, she is a great song writer.

Overall, this was a very well put together biography and I enjoyed it a lot more than I thought I was going to!

This bestseller is now newly revised and updated

Taylor Swift: The Platinum Edition gets to the heart of this superstar with albums and singles that head straight to the top of the pop and country music charts, a shelf full of awards, and millions of fans around the world.

Fans looking for Taylor’s complete story should look no further than this detailed biography, which chronicles her childhood in Pennsylvania where she was teased and bullied, to her early days trying to land a record deal by personally dropping off demos at Nashville record companies, to the performance that led Taylor to her current label — and international fame. Includes details on her 2012 album Red and coverage of all her recent romances and adventures in the spotlight.