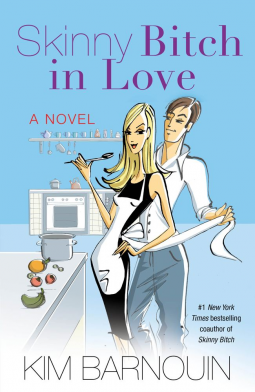 The book starts with Clementine getting fired from her vegan chef job for adding BUTTER to a dish.  She was sabotaged and now no one wants to risk hiring her at their vegan restaurant – not even vegan food trucks!  Instead of sitting around and doing nothing, she decides to start her own cooking class to try and pay the bills.  There is a place across the street that she wants to rent, but on the first day of her cooking class and giant STEER HEAD goes up in the space and is staring at her through the window.  She confronts the restaurant owner and asks him to take it down – but he refuses.  She ends up developing a bit of an interesting relationship with him – he is a millionaire AND he eats meat!  He enrolls in her cooking class and asks her to make a few items that he can see about adding to his menu.

Clementine doesn’t really like that Zach (the millionaire restaurant owner) is kissing her but then seems to be meeting up with other girls all the time too.   He sees other people and she’s not sure she’s ok with that.  Except that she is kind of sort of seeing other people too – well, one at least, named Alexander.

After sending out press releases promoting herself and getting an interview with the LA Times, her recipes go MISSING after a party in the apartment.  Would someone really have stolen them? You’ll never believe who she sees out and about while she is trying to get ingredients to re-create her recipes!  I know I didn’t, my jaw dropped.

Would the missing recipes cause a set back in all the progress she had been making? Would her dreams come true to open her own restaurant? And would she fall in love? Find out lal this and more – in Skinny Bitch In Love.

A quick and fun read!

In this new novel based on the #1 bestselling Skinny Bitch books, a twenty-something chef loses her dream job—only to find happiness after she launches a vegan cooking school and falls for a sexy carnivore.

Twenty-six-year-old Clementine Cooper is an ambitious sous chef at a hot vegan restaurant in Santa Monica. When an important food critic visits the restaurant, a backstabbing coworker sabotages her vegan dish by adding butter. Fired from her job and blackballed in L.A., Clementine has hit rock bottom. Not one to wallow, she decides to launch her own cooking school and personal chef business called Skinny Bitch.

Every day, Clementine passes a space for lease in her neighborhood and fantasizes about opening her own restaurant. Fifteen tables. A juice bar. Cali-meets-Moroccan décor. She plans to work hard, save money, and buy the space. But on the first day of her cooking classes, she discovers that millionaire restaurateur Zach Jeffries is opening a steakhouse in the same space!

Zach is the antithesis of everything she stands for, but she’s incredibly attracted to him. And it seems like he might be attracted to her too, since he immediately enrolls in her cooking school. Can two people who are so fundamentally different actually find love? As Clementine rebuilds her life with new friendships, romance, and recipes, she finds that there are healthy choices to make both in and out of the kitchen.