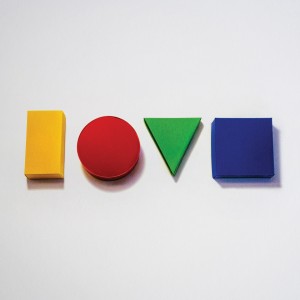 
Love is a Four Letter Word is the latest release from Jason Mraz! His first album in nearly 4 years.  Admittedly, I had not really kept up on his career after Waiting for My Rocket to Come came out.  Obviously I had heard his songs on the radio and saw a TV appearance here or there, but with the release of Love is a Four Letter Word I jumped back in to the land of Mraz and by pre-ordering his CD I received a pre-sale code for his tour this summer so I will be checking him out in August. It will be my first time seeing him live and I am excited!

The album is a bit different from Waiting for My Rocket, which is to be expected as Jason has had 10 years to grow as an artist since that was released.  However, all of the reasons why I fell in love with Jason in the first place are still present in the album. (And the lyrics are not quite as fast paced as some of his other releases so it will be that much easier to sing along!)  The album as a whole is a bit more mellow and laid back, which I generally do not like – but it totally does the trick to calm me down when I toss it in to the computer’s CD player when it is a stressful day at work and I don’t think I can handle all the work load I’ve been given.

With the exception of the first track (The Freedom Song) all the songs on the album were co-written by Jason.  “The Freedom Song” was written by Luc Reynaud with children in the wake of Hurricane Katrina. Read the remarkable story of how this song came to be and see how it contributes by visiting www.LucAndTheLovingtons.com. Each song has a bit of a story as written in the linear notes.  That is where the information about The Freedom Song came from.  It is interesting to see Jason’s thoughts and notes (I assume) on each of the songs included on the album.