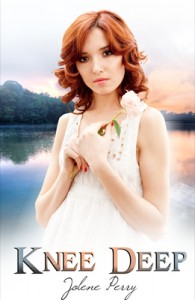 When I saw that another book from Jolene Perry was available for review, I jumped at the chance because I had loved her book Night Sky which I had read previously.

Knee Deep is about a girl named Ronnie (short from Rhonda), she is in highschool and dating a guy named Shawn who she believes she will be with forever. Shawn begins to change and become abusive and her best friend Luke is trying to get her away from him.  Meanwhile, Luke and Ronnie are playing opposite each other in the school’s performance of Romeo and Juliet and Ronnie isn’t sure if she is falling for Luke because of herself or because the connection that they need to have with each other in the play.

When Shawn gets abusive towards Ronnie in front of Luke, Luke tells her that she has to leave Shawn, but Ronnie is torn.  Should she leave Shawn and go for Luke? Or leave Shawn and spend time alone? Or stick it out with Shawn who is obviously going through a tough time?

I loved this book as well, I guess I just really like the young adult genre and I also really love Jolene’s writing style.  I completely feel like I am in the story with these characters and rooting for them to make it through alright, although there were times I wished I could have jumped in to the book and yelled at Ronnie to listen to Luke.

I would definitely recommend this book to anyone else who loves YA books or is a young adult themselves as it is helpful with trying to show how to deal through abusive relationships, which happens all the time.

I received a free e-copy of this book in order to participate in this blog tour.

Shawn is the guy Ronnie Bird promised her life to at the age of fourteen.  He’s her soul mate. He’s more uptight every day, but it’s not his fault. His family life is stressful, and she’s adding to it. She just needs to be more understanding, and he’ll start to be thte boy she fell in love with. She won’t give up on someone she’s loved for so long.

Luke is her best friend, and the guy she hangs with to watch girlie movies in her large blanketopias. He’s the guy she can confide in before she even goes to her girlfriends, and the guy who she’s playing opposite in Romeo and Juliet. Now her chest flutters every time he gets too close. This is new. Is Ronnie falling for him? Or is Juliet? The lines are getting blurry, but leaving one guy for another is not something that a girl like Ronnie does.

Shawn’s outbursts are starting to give her bruises, and Luke’s heart  breaks as Ronnie remains torn. While her thoughts and feelings swirl around the lines between friendship and forever, she’s about to lose them both.

Jolene grew up in Wasilla, Alaska. She graduated from Southern Utah University with a degree in political science and French, which she used to teach math to middle schoolers.

After living in Washington, Utah and Las Vegas, she now resides in Alaska with her husband and two children.  Aside from writing, Jolene sews, plays the guitar, sings when forced, and spends as much time outside as possible.

She is also the author of Night Sky and The Next Door Boys.