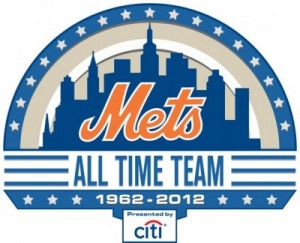 Sunday night as part of a belated Birthday Gift / Father’s Day gift for my Dad I took him to the 92nd St Y to see SNY preset the Mets All Time Team. (Or I guess he took me as he was the brave one to drive to the city!) We couldn’t find much information about it at all, but the write up on the website said that Tom Seaver and Keith Hernandez would be there, so I figured it would be worth it. Tom is my dad’s all time favorite Met and Keith is one of my favorites and I was hoping that David Wright might show up as well.

We got there too early for doors so we went outside to debate if we should grab a bite to eat first.  While debating, Cleon Jones showed up. (I could spot all the tinted window suburbans and my Dad could recognize the players, we made a good team.)  We also saw Jay Horowitz, the Mets head PR guy walk in as well as Howie Rose, one of the Mets radio announcers.

Then my Dad asked if we should go down a block and grab a slice of pizza, but I spotted Keith coming around the corner. He looked confused so we grabbed my camera and were ready to try and stop him for a photo, but he ended up going up the ramp and not the stairs near us.  Some other guy shouted out “Hey that guy we have the bobblehead of just walked in.”  We decided to hang around to see if anyone else would go in the front entrance but no one else did.

Shortly after 8 the program kicked off and we finally found out some more details of what would actually be going on.  There would be 4 “nominees” for each position and then the all-time player for that position would be chosen.  Some were obvious choices, some were harder but my Dad said ultimately he thinks that they picked the right one for each position. (Although Davey vs Gil for Manager is up for debate.)  The show airs on Thursday at 7pm on SNY so you can check out all the details. (I’ll post again if anything was cut out that I thought was important.)