June 5, 2012 by ConcertKatie No Comments 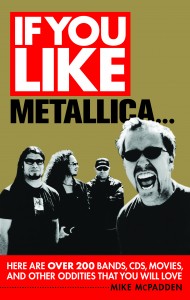 If You Like Metallica is a book by Mike McPadden. It is sub titled “Here Are Over 200 Bands, Films, CDs, and Other Oddities You Will Love”.  And the book lists just that. It is broken down in to 10 chapters, mostly listing other bands which are categorized in each chapter:

2. The Frayed End of Sanity: Crackposts and Iconoclasts

8. Hero of the Day: Metallica Movies

10. Read the Lightning: The Best Books to Crack Open… If You Like Metallica

Now I know what you are thinking – you’re thinking – but Katie, you don’t like Metallica so why would you read this? And the answer is – you’re right, I don’t like Metallica but you’d be surprised at just how many of the other bands listed in this book I do listen to (perhaps it is only a handful, but considering the music I do listen to I was surprised just how many bands from my iPod were in this book.)  And I thought it would be interesting to read up a bit on Metallica.

Mike does a great job with talking about Metallica in relation to the other bands, but still gives a short bio on many, many other bands.  Some longer than others, of course, but the book was interesting enough that I didn’t feel the need to wait until the next day to finish it or give up on it completely (which I try NOT to do, but there are a few books that I have just been unable to finish)

In hard rock history, there is the time before Metallica and there is everything that has come since: metal, punk, industrial, grunge, alternative-all of it absorbed, transformed, and reinvented by the band that, for decades, has ruled as both the Beatles and the Stones of heavy music.

From garage rock to the avant-garde, indie pop to hardcore punk and, of course, all shades of metal, If You Like Metallica . . . illuminates the sounds and styles that influenced and have been influenced by this band, in addition to nonmusical elements such movies, books, and cultural iconoclasts.

Just as Metallica expanded heavy metal to new meanings and new possibilities, If You Like Metallica . . . expands being a fan of the band to an education and a treasure hunt that, put as bluntly as a devil-fingered salute to the face, rocks.